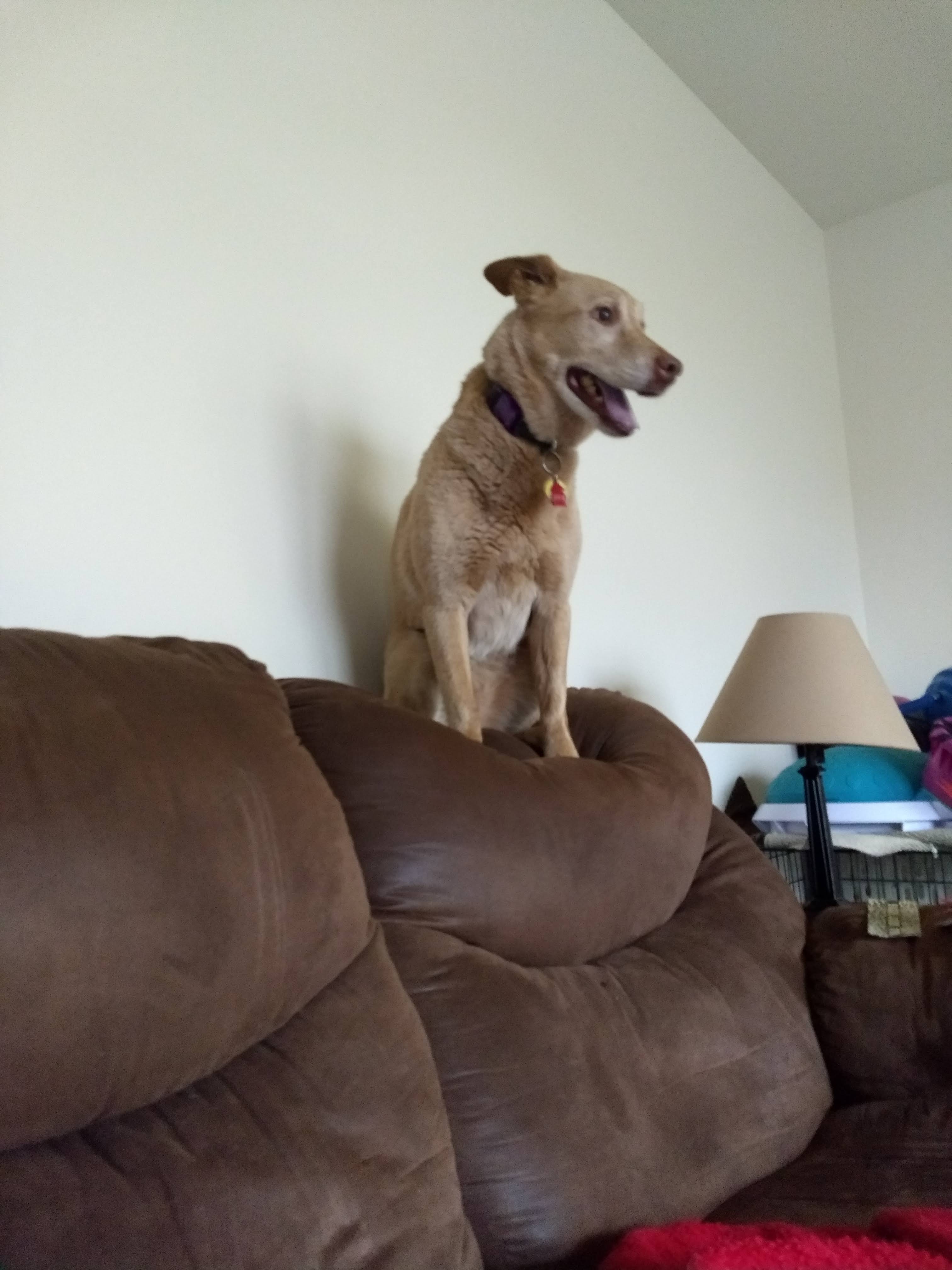 It has been nearly seven years since I wrote about Jolie (1st post and 2nd post). And much has changed in our lives in those seven years. We have moved four times. We have increased our family by +1 (hello Lollipop #2). And we have grown and matured as a family through various adventures, trials, and achievements.

She is sleeping peacefully on the couch. The TV is turned on. She wakes up and begins to pace looking for a piece of furniture to climb (the end table by the couch is her go to right now), knocking anything off, with angst in her eyes. No longer does she want to be a giant needy lap dog. Holding on to her gives no comfort, to her nor us. Now she is simply a climbing dog.

There is no way to describe her attitude other than crazed. It is like the floods are rising and she knows if she doesn’t climb the walls, she will drown.

Over the last few years, Wife and I have gone the route of the robot vacuum cleaner. I won’t tangent here, but there are definitely stories to tell about our melodramatic robots. We have gone through a few robots of various brands due to a wide range of reasons (ref future post). But when shopping for a new robot companion, paramount in our brains is what type of beep the vacuum emits and whether or not it can be silenced.

We have had a treadmill in the garage that’s use was completely dictated by the placement of Jolie. Upstairs, in the bathroom, with the fan on? Ok, I’ll go for a run. I say “was” because I finally got fed up with it, bought a desoldering pump, broke open the treadmill’s innards, and yanked the beep speaker right off the circuit board. Silence!

A similar story happened when Lollipop #1 used some Christmas money to buy herself a hoverboard. One week in and Jolie was telling us that the craft was completely unacceptable. But I whipped out my newly acquired desoldering pump and locked on a new target. 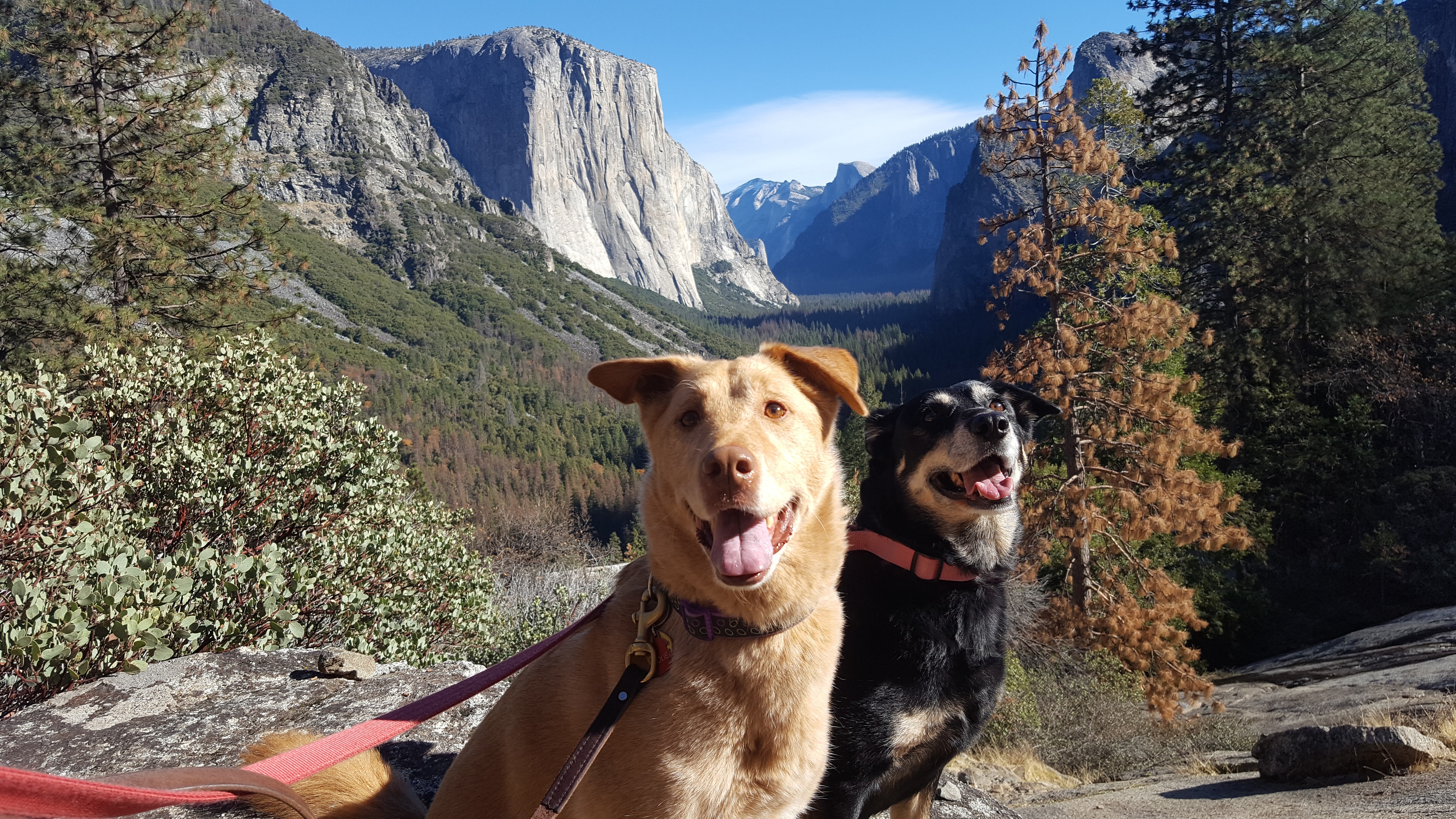 Jolie and Daisy at Yosmite

At all hours of the day and night… Storms are bad – Lightning and thunder alike. Wind is bad as it rumbles the trees and outside of the house. Construction beeps from nearby home construction is bad. Reminds me of all of our California camping adventures (big RV’s backing up, smoke alarms going off on camp cooking). Even certain birds chirping is bad.

As Wife has been planning to head back out into the workforce now that the Lollipops are in school, we’ve been attempting various medical solutions under the supervision of Jolie’s vet. We can’t have her going ballistic in her cage in the middle of the day, hours from reprieve. Well, we have tried every drug the vet has thrown our way, at various dosages, and absolutely zero effect. Not a sleepy dog, not a dopey dog, just the same Jolie, same triggers, same terrors. 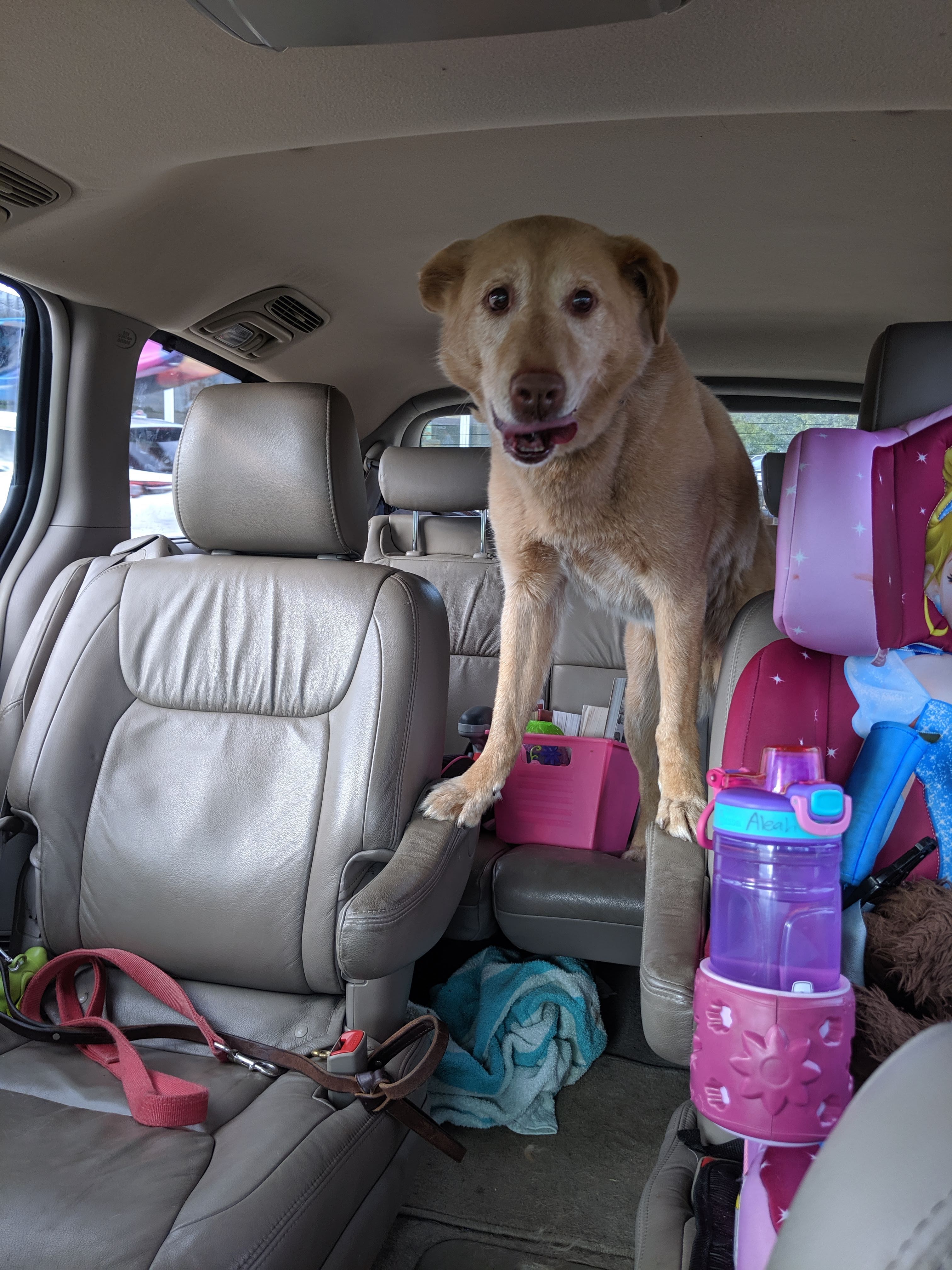 And yes, she has been to a few specialized trainers over the years, and still here we are.

Recently, however, there has been a slight change of events! Jolie has always enjoyed her ChuckIt play balls. They are the one toy that she enjoys but also can’t destroy. But lately, she has become what can be described as nothing less than obsessed with them. Carrying them around all over the house and bringing them over for a game of fetch. She still doesn’t give them up without a fight, but she definitely wants to play.

So this is her new drug. Oh, is something bothering you? Here, fetch! And it does work, much of the time. The biggest challenge, honestly, is for us humans to mentally get past the frustration and make the effort to get on the floor and play. And by proxy, distract her from her mental breakdown. 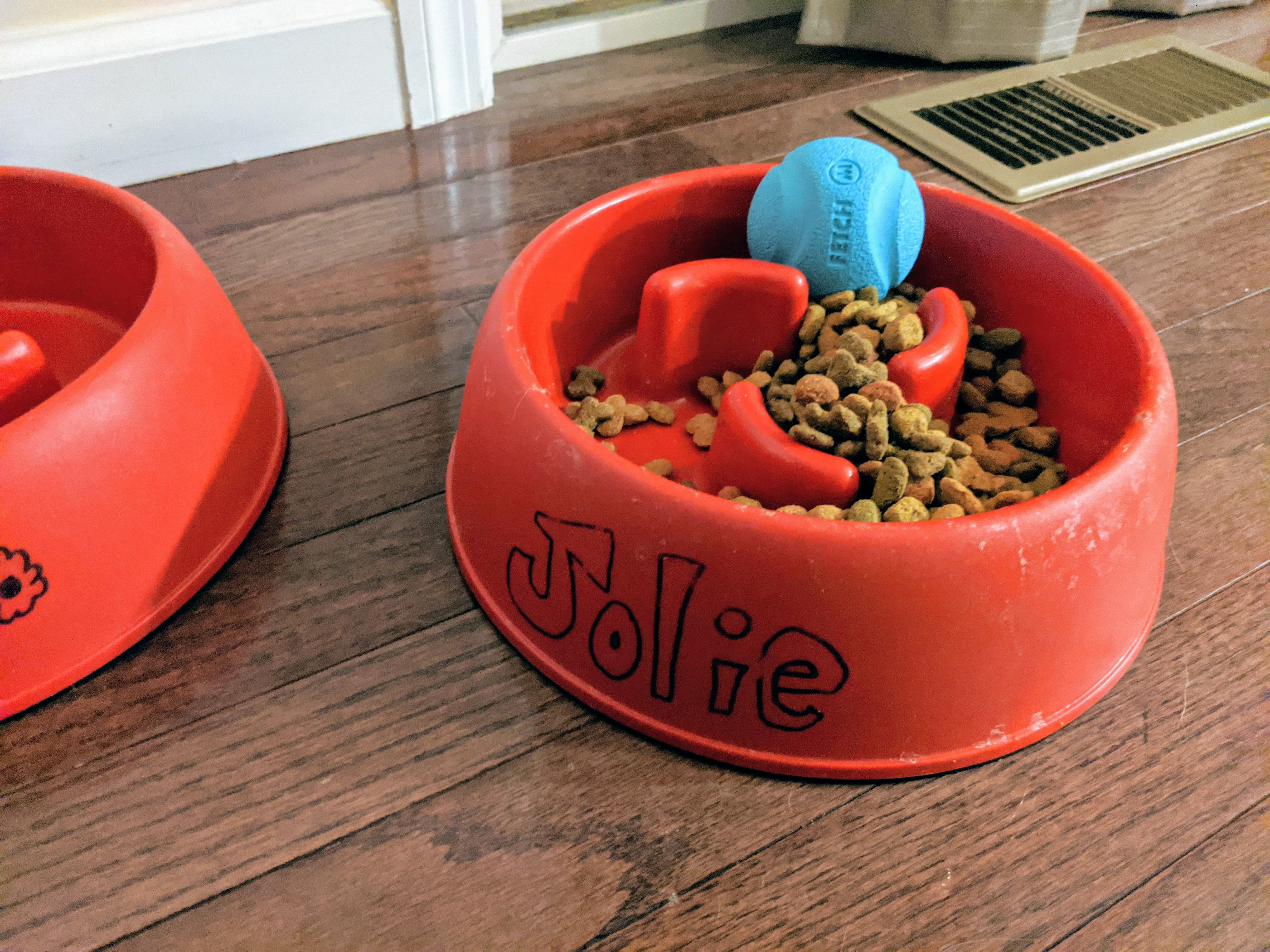 We have found her ball (she has multiple of two different colors, blue and orange) in many different places. Tonight’s inspiration for this post was seeing it in the half finished food bowl pictured above. We have found it in her water bowl quite a few times. Sometimes the water bowl is empty, sometimes it isn’t. She drops it into the water bowl when stopping for a drink and only sometimes takes it out before she takes her leave. 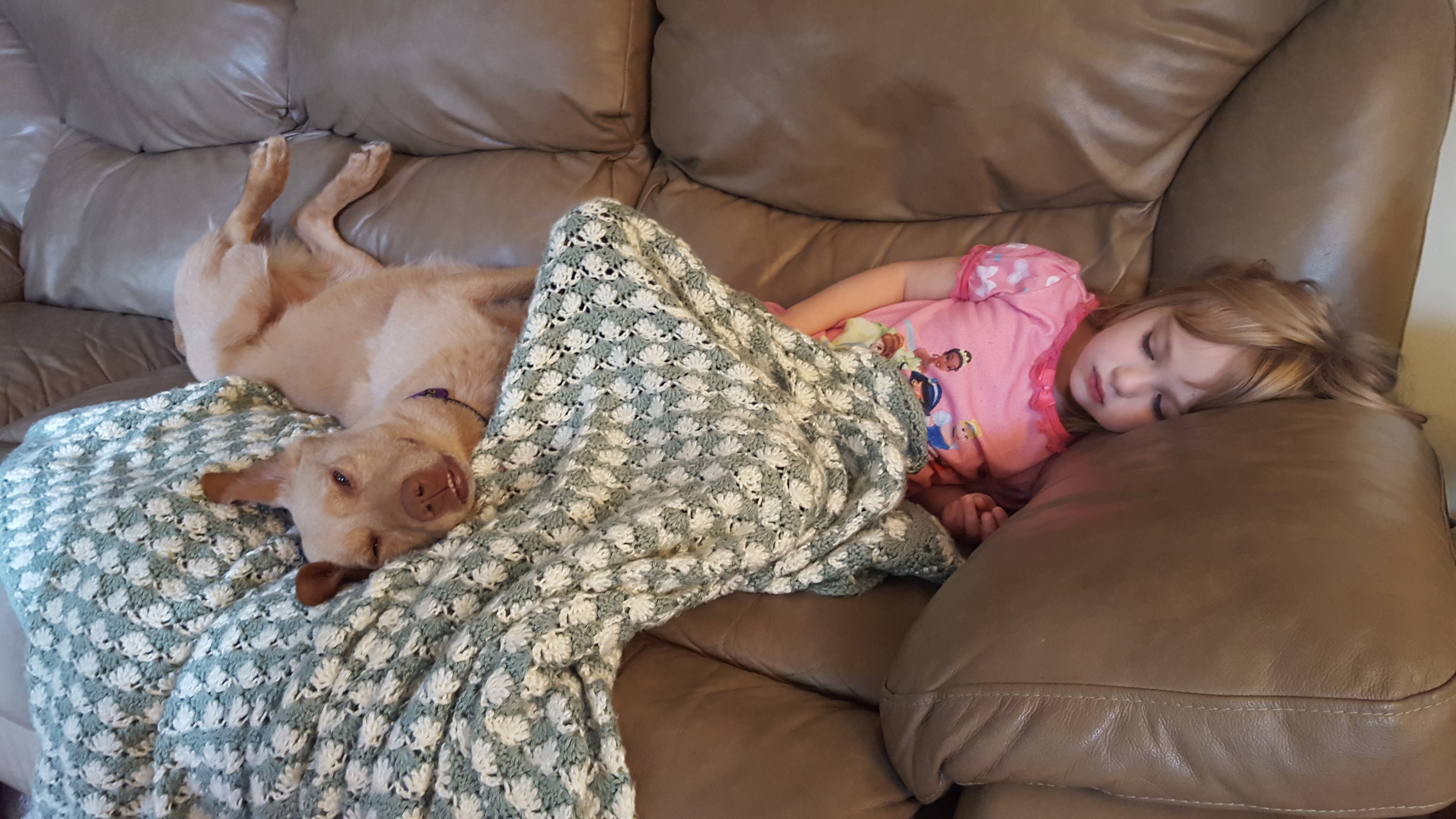 In all her quirkiness, Jolie is with us. And while sometimes we question how much we like her (actions), she is loved, and is definitely a major part of our family. She continues to be great with her sister-pup Daisy and phenomenal with kids. Lollipop #1 has actually taken quite a liking to taking care and “training” Jolie when Jolie is going a bit crazy. And just today I walked in and found Lollipop #2 sitting under the dining room table with Jolie reading her a book. 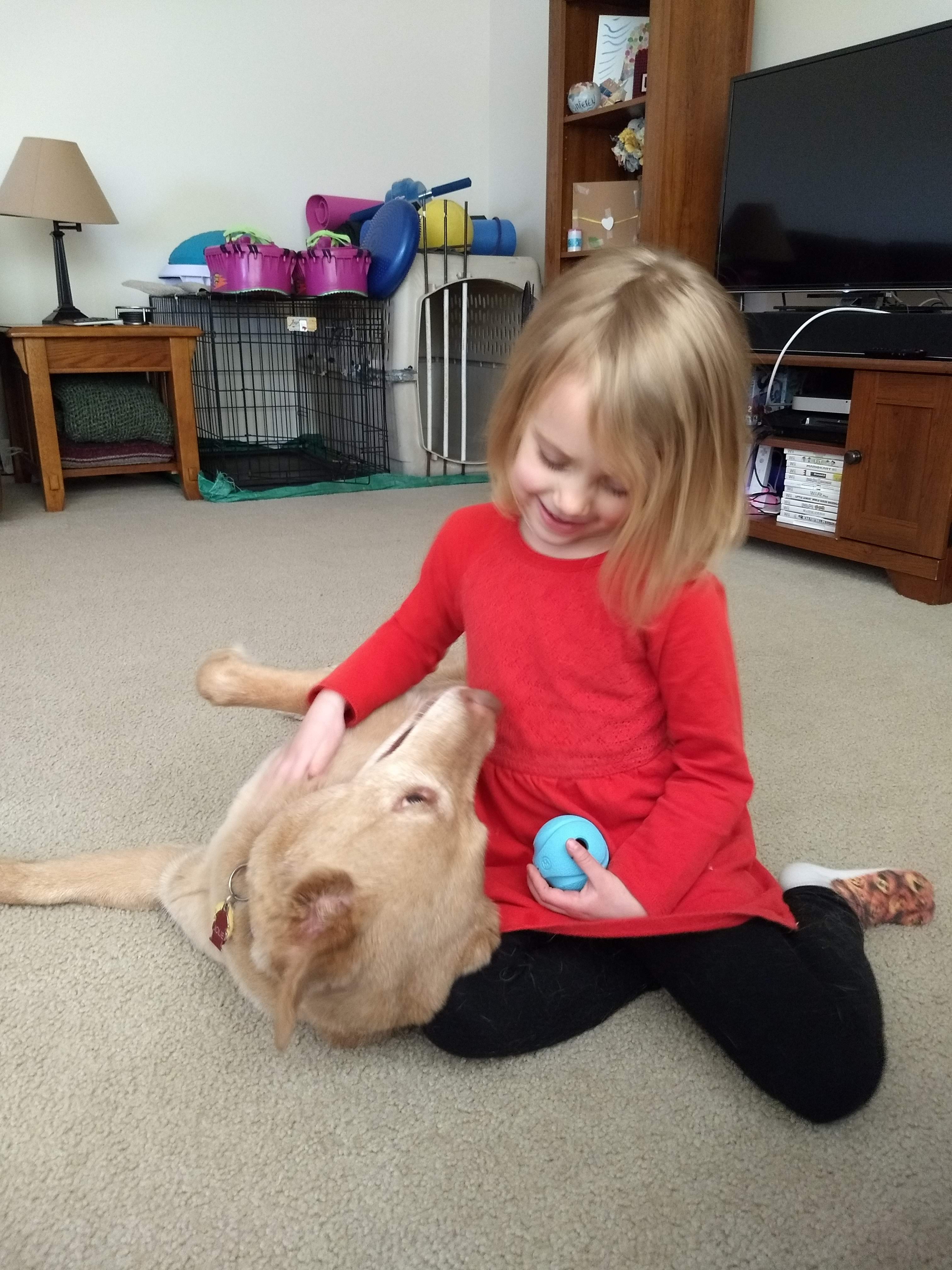 As she lays next to me while I peck my thoughts into the keyboard, she is calm. Calm is good. She does put many restraints on our daily lives. But I did get to buy these awesome new headphones that I love, and not only do they make me happy … they make Jolie happy. What’s that Jolie, it would make you happy if I bought at 75 inch TV?