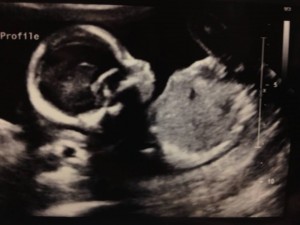 So… this post is about baby stuff.  What I’m going to do for you (because I also am a dumb dude) is write…

One paragraph of what’s happening

[box color=”blue”] And then one paragraph of what’s happening in words a Dad or non-Parent can understand.[/box]

Crazy little spout of baby drama over the last week in our house!  Baby’s due date is December 23rd and at our last appointment baby was still transverse.

[box color=”blue”] _The baby is lounging sideways in Wife’s belly … I’m no doctor, but I’m pretty sure baby’s don’t come out that way. _[/box]

So on the doctor’s advise, we made an appointment with Labor and Delivery at the hospital we are planning to deliver at, to get an ultrasound and possible external cephalic version (ECV) on the baby.  The way the ECV’s works is pressing on the Mommy’s belly in ways that make the baby rotate in the womb which is painful for Mommy and potentially unsafe for baby, possibly leading to an emergency C-Section.

[box color=”blue”] So since baby’s aren’t born laying sideways (ouch!) we made an appointment for the doctor to manually rotate the baby.  Manually rotating babies (still in the womb) is extremely painful for the Mommy and potentially dangerous.  This could lead to a quick reaction of cutting the baby out of the Mommy. [/box]

The appointment was for some time this last Wednesday.  We had to call in the morning and find out when they could fit us in.  We called at 0700 and 1000, with the eventual “call back Friday”.

[box color=”blue”] There was too much crying at the hospital’s labor and delivery that day and they were unwilling to admit one more wide-eyed Daddy to contribute any more to it. [/box]

We called back Friday (today) and were able to come in right away to see how baby was doing and see if we wanted to continue with the version.

Wife got all situated in the bed and they started the ultrasound to see how baby was laying.

Low and behold … baby had rotated and was head down already!

We packed up and went home.

So some time between last night when we could see baby in the belly laying transverse and this morning at the hospital … baby (and God…) decided it was time.  We were extremely fortunate that the hospital turned us away on Wednesday due to their overload of Mommies, Daddies and new-born Babies.  That delay meant that Wife avoided a for sure painful procedure (even before a possible C-Section) and Baby avoided a potentially dangerous situation.

I am reminded of the lesson we went over in Bible Study this past Sunday.  It concentrated in the Gospel of Luke, at the very beginning (Chapter 1), a story of a birth, but not the birth of Jesus, the birth of John the Baptist.  Zechariah and Elizabeth were old and without children.  In that time it was considered a disgrace on the woman to not give birth to any children.  One day Zechariah, who was a priest, was in the temple giving offerings to God when an angel, Gabriel, appeared to him.  Gabriel told Zechariah that he and Elizabeth would have a child!

Zechariah was confused and doubted his and Elizabeth’s ability to have a child (don’t mind the fact that an ANGEL just appeared and started talking…).  So in response to his doubt, Zechariah became mute until the baby was born.  I think Gabriel was equally surprised at his reaction for his response was “[Dude…] I am Gabriel.  I stand in the presence of God […]” (Luke 1:19)

So what’s this have to do with a crooked baby and unnecessary trips to the hospital…?  One more verse…

“And now you will be silent and not able to speak until the day this happens, because you did not believe my words, which will come true at their appointed time.” (Luke 1:20)

[box color=”blue”]My opinion?  We’ve been calling the baby Dreidel because of the due date (yes we are an equal-opportunity pre-birth naming family) and God just had to get a chuckle out of “spinning Dreidel” …[/box]