So apparently the Mac gods are playing tricks on me… As soon as I finished publishing this post and closed Firefox, the speaker crackled again.  I turned on iTunes to a little Copland - Fanfare for the Common Man and all was fine… bizarre.  I decided to restart to make sure, and here I am… both speakers are working.  The only thing I can think of was just before the speaker crackled and sizzled out, I did an EFI Firmware update.  Honestly I have no clue.  I’m just happy my speaker is back to normal… although a little bit of confidence is lost.  I think I will be cancelling my Genius Bar appointment.

I love Apple products, I promise I do.  It just so happened that this weekend a bundle of inexcusable (in my, as the consumer’s opinion) deficiencies occured.

Least importance: I noticed that my USB cord for my new iPhone 3G’s wire cover was severed close to the connection on the Mac end (see picture below).  Now this really isn’t all that important.  It still works.  It doesn’t look good.  It isn’t that old… and that’s the part that makes me twitch in a fashion that I don’t find all too comfortable.

[caption id=”attachment_285” align=”aligncenter” width=”225” caption=”This is a shot of where the wire casing has severed. It appears the actual wires are still fine.”]

Middle importance: A little piece of my MacBook casing has fallen off.  The piece is right where my right palm rests, just to the front-right of the trackpad and button.  This issue is not causing any hinderance of the product’s use.  But the MacBook (although heavily used) was only purchased December of 2007.  Exactly nine months ago.  I would think the plastic would be meant to last a little bit longer than that.  For a while the piece was just cracked completely off on one end, so it would flick around sometimes.  However, once when moving my hand, it caught the piece and broke it completely off.  I think all it would need is some glue, but I haven’t gotten around to looking into that.  This is an eye-sore on an otherwise very sexy laptop. 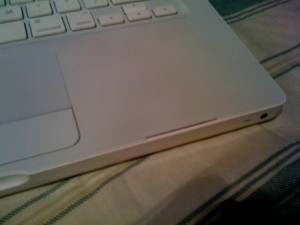 Most importance: This issue just happened no more than an hour ago.  This issue was what pushed me over the edge.  This is the issue that made me a not completely satisfied consumer.  One of the speakers (the left) of my MacBook ‘popped’ and then stopped playing sound.  I was working in GarageBand, nothing heavy, just making a ringtone to export to iTunes from an mp3, and all of a sudden POP … error message telling me something about too many ‘real instruments’ (which there was only one track of the mp3 I clicked and dragged in) then no more sound from the left speaker.  This put me over the edge, as yesterday I was having some sound issues with my iPhone 3G (which a restart took care of).

I immediately went onto http://www.apple.com/retail, found the store in the mall close to me, and made an appointment for Thursday evening after work with a genius.  I only made mention of the piece of casing that fell off and the mainly the speaker.  I do not remember what the AppleCare plan I have (whether or not I bought/extended one).  Working speakers on my MacBook is a big must.  I use the iSight for video chat over iChat every day, and I already thought the speakers were too quiet.

I will write an update post and provide link below after my visit with the Genius’ at the Apple Store.  I hope they can help calm my nerves on this one.