Today, Melissa and I finally got back out to StartSkydiving.com where we made our first jump of 2010.  I could not believe it had been nearly 9 months since my last jump!  Both of us had made 17 jumps, which isn’t enough for a license, but done with all the classroom material.  So we needed a refresher jump with an instructor before we could go back to jumping on our own.

That’s all fine and dandy, both of us liked the idea of having a little coaching and reminders on emergency procedures and altitudes before throwing ourselves out of a perfectly good airplane anyways.

We waited around the drop zone for a bit and finally it was our turn to get geared up and head out to the plane.  On our way out, some of the jumpers that were just getting back in told us that it was just starting to rain a little bit at the higher altitudes.  Huh, well that’ll be interesting!

Interesting is quite the understatement of the day… OUCH!!!!!!

If you think about this from a numbers standpoint, when raindrops hit your head when you are standing on the ground, they don’t hurt, they aren’t traveling very quickly.  According to this site, a raindrop falls at about 22 mph, give or take a little depending on the size of the raindrop.  Well when I fall from the sky, I’m traveling somewhere between 120 mph and 130 mph.  You see where this is going?  Do a little subtraction and there we go … raindrops hitting me in the face at about 100 mph!

And if this wasn’t enough, after we get back on the ground someone comes back from the computer saying, “Hey guess what! At 7,000 feet it was freezing rain!”  So little ice pellets hitting us at 100 mph.  And even then, when we weren’t being bombarded by a torrential … uppour … of ice pellets, the raindrops we were hitting were from the opposite direction they normally hit people.  They typically have this nice round shape that plops nice on your head.  But the top of a raindrop is all sharp and pointy.  And that unfortunately is the side that hits you in the face at 100 mph when you are skydiving.

Once we got down on the ground we all had a good laugh about the jump, complained about our aches and pain and the such, but all secretly enjoyed having another story to add to our repertoire.

I know, it sounds like I’m complaining.  But I think that jump was just so funny.  Sure it felt like thousands of needles were giving amateur acupuncture to our faces and hands on the way through the dive flow and it definitely hurt. 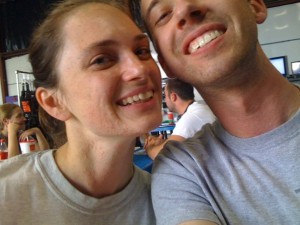