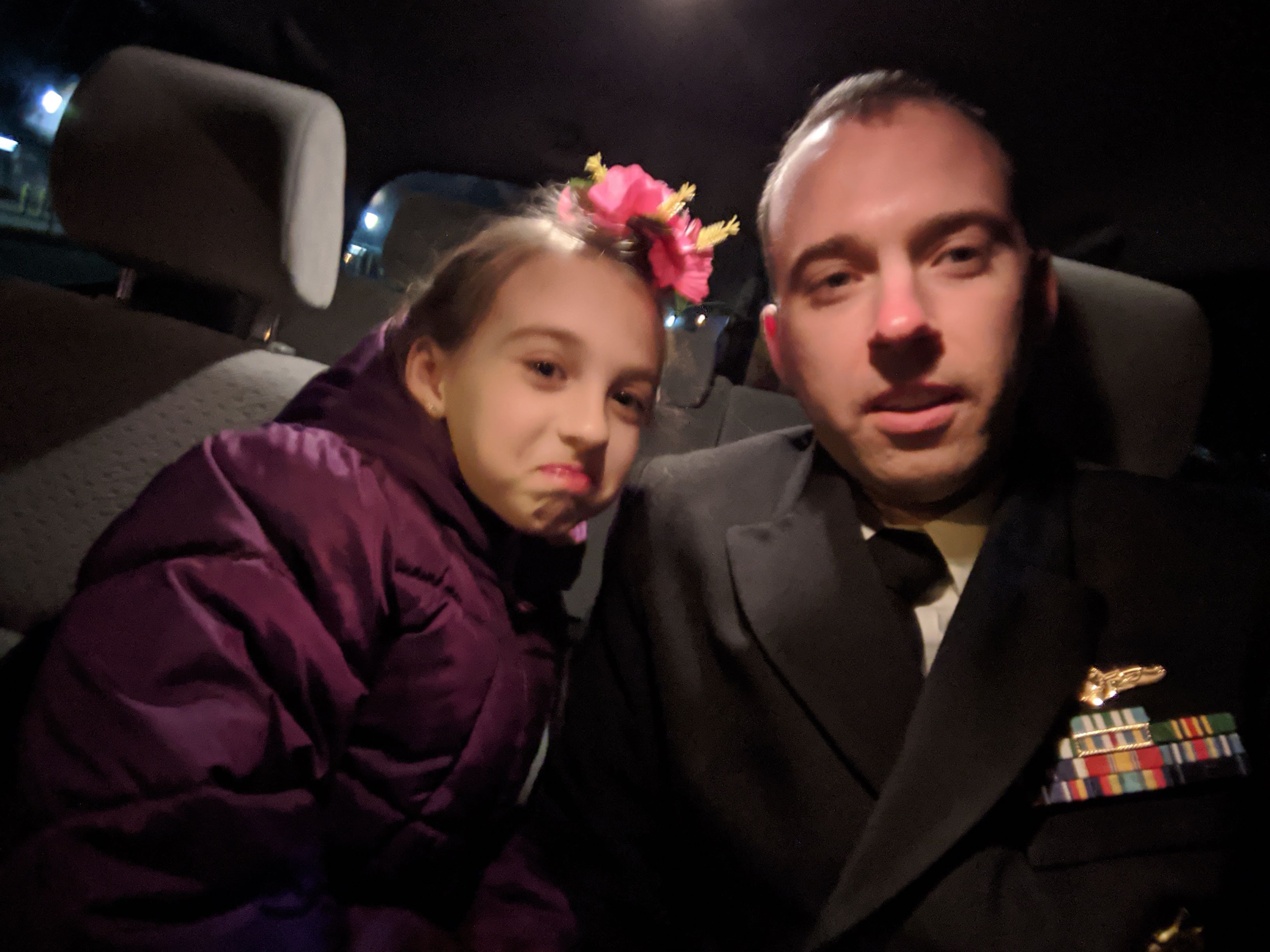 Sad faces from Lollipop #1 and me

On a cold winter night, this past January, I sat, in my truck, at a bus stop, in a place I’d never been, looking at Lollipop #1, whose eyes were welling with tears. That night … was just never meant to be.

The day started as any normal Saturday, with kids up early and parents sleeping in. It’s a treat that Wife and I don’t take for granted. The kids’ morning routine is rigidly and wonderfully set (all to Wife’s credit). Stay in bed until 7:00. Stay in your room until 8:00. After 8:00, you can play, quietly, together in your rooms or downstairs. If a parent doesn’t show up by 9:30, you can get yourselves a granola bar for pre-breakfast. I don’t know how Wife does it!

But that’s where the “normal” of this particular Saturday ended.

There’s nothing quite like waking up to the sound of a dog retching. Culprit? Jolie. She does this, sometimes. As I’ve written before, she is beyond quirky. Some of her quirky traits, that sometimes induce later vomiting, involve licking the carpet and getting lots of hair in her stomach, and eating poop (which is often filled with hair). So Wife jumps into action maneuvering the dog into the bathroom where she (the dog) proceeds to vomit all over the floor. Me, I promptly gag and dry-heave myself straight out of the bedroom.

We eventually find our way downstairs and find Lollipop #2 curled up on the couch. This is not her normal demeanor. Normally, she is running around, tackling her sister, or at least playing with her stuffed animals. None of it. Yup, she has a fever. And then Jolie vomits all over the kitchen floor.

Ok, today is not off to a good start. And it doesn’t get better.

Jolie continues to vomit all morning. She has her own personal puke bucket that stands smelly and ready for the next episode of stomach egress. Wife and I discuss whether or not we need to take her to the vet. A quick phone call later, we are headed to PetSmart. Apparently five is the magic number. If your dog has thrown up five or less times in some subjective definition of “amount of time”, then you just let them ride it out. Jolie was up in double digits. 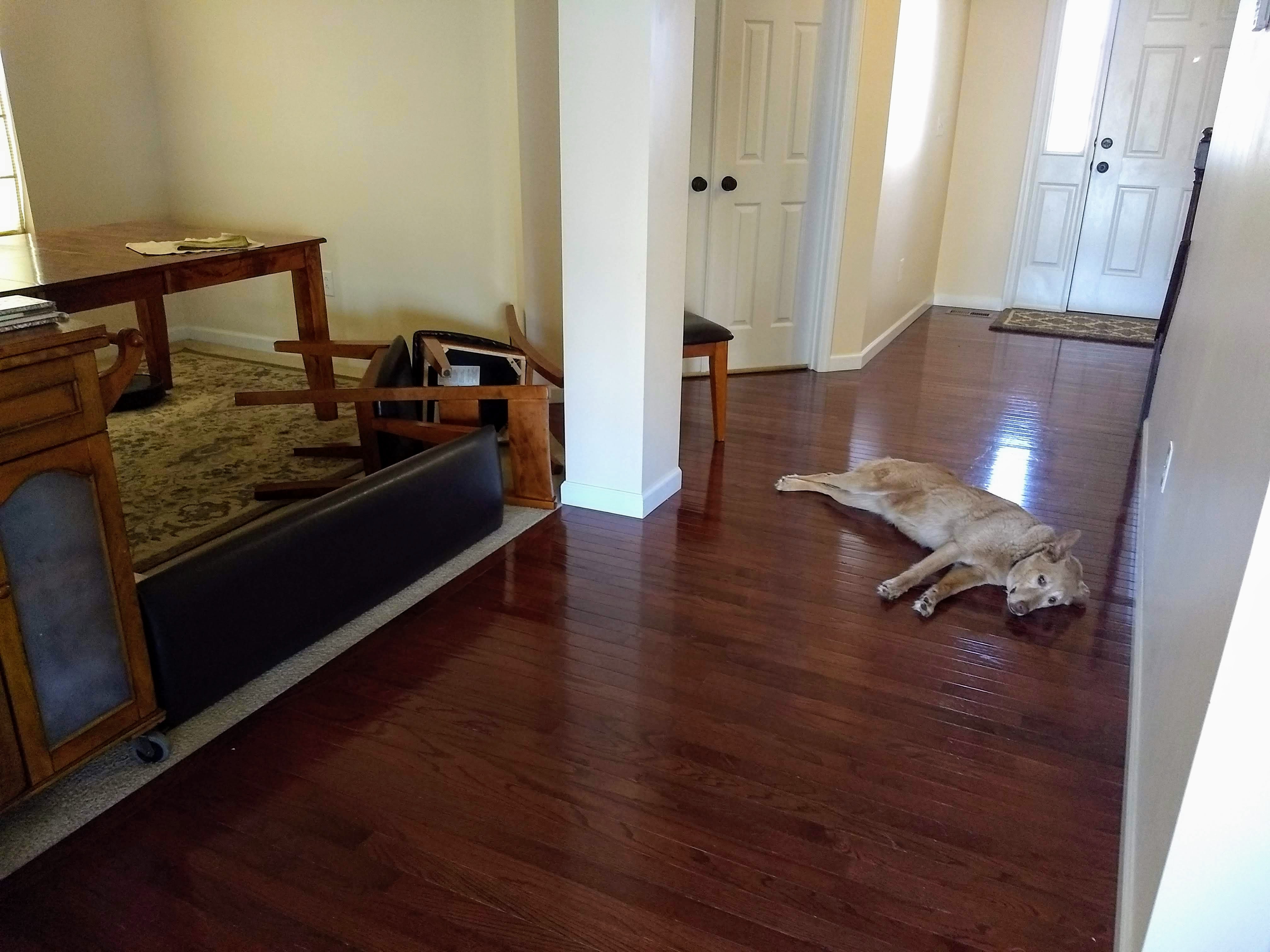 Fortunately, the trip to PetSmart was uneventful and we received some stomach calming medicines to hopefully help poor Jolie out.

Also fortunately, Lollipop #2’s fever was gone by this point, but sniffles persisted.

Now, back at the house, Wife and I discussed our evening plans. You see, we had a babysitter scheduled for the evening, as her and I were expected at a formal dinner and awards ceremony. We don’t get “out” enough, so babysitters are a bit of a rarity around here. We always say we are going to take advantage of a neighborhood babysitter more when we move to a new place, but we never do. So, we had to decide if a babysitter was going to be ok with Jolie (who hadn’t vomited in like a whole hour!) and Lollipop #2 who, while sniffly, was mostly back to normal.

We cancelled. I then called the people organizing the dinner and made the substitution of Lollipop #1 for Wife.

Lollipop #1 loves getting dressed up. She has always loved getting dressed up. Wearing dresses, the rare treat of makeup, getting her hair put up, being fancy … she loves it! To say she was excited to be my date for the evening, is an understatement. So we both got ready, wished luck to Wife as she stood alone and unafraid defending the hardwood from any additional attacks, and headed out for downtown St. Louis.

Traffic was rough. I kept an anxious eye on the clock as we battled what I later figured out was an onslaught of Monster Jam fans. Pulling into the Missouri Athletic Club parking garage, only two minutes late, the attendant asked what event we were attending. “Navy League of St. Louis”. Silence. “Umm, I think that event is at our other location…”

Yup, wrong Missouri Athletic Club. Apparently there are two. The one we were at. And the one that was actually written on our invitation. Every ounce of me just wanted to call it a night and instead of driving an additional 30 minutes away from home, just go home. But Lollipop #1 was in the backseat looking beautiful and expectant at what was to happen next.

I quickly call the dinner organizer, leave a message apologizing for being late, and off we go. Monster Jam traffic was still bad, but moving out of the city was a much easier victory than driving in.

On the way, Lollipop #1 and I talk through “being late”. Her elevated stress levels and disappointment are quickly mitigated after reminding her that dessert is at the end of the meal. She tells me that Wife had already told her there might be food she doesn’t like. And that she’s not too disappointed about not uncovering that mystery.

Google chimes and tells me to take the next exit. Driving down the long exit I notice some water flowing across the road. About five seconds later I realize that it was not water and in fact ice. The truck fishtails and points us at oncoming headlights. It fishtails again and points us the other direction into the trees that line the exit ramp. Then boom we collide with the curb and straighten out. Still moving, slowly, Lollipop #1 says she’s ok and we find a turn that takes us into a parking lot, apparently a bus stop.

The truck seems to be ok, but our nerves are rattled a little bit. We pull into a spot and I tell Lollipop #1 that I want to check the tires. As soon as my door is ajar I can hear the hiss of escaping air. Walking around the perimeter of the truck I survey the damage. Rear passenger tire is quickly deflating. Some scuffs on the front passenger tire but seems to retain its integrity.

Now let me summarize what happens next. It is bitterly cold and windy outside. And my lack of preparedness is quickly evident as I have never had to change a tire on my truck nor any vehicle with a spare mounted underneath it. So I begin on YouTube, go outside, try to find, in the dark, with frozen numb hands, the right spot that clicks the pulley to lower the spare. I could last about five minutes outside before having to go back into the truck and regain feeling in my fingers. Oh yeah, and I’m in a dress uniform. 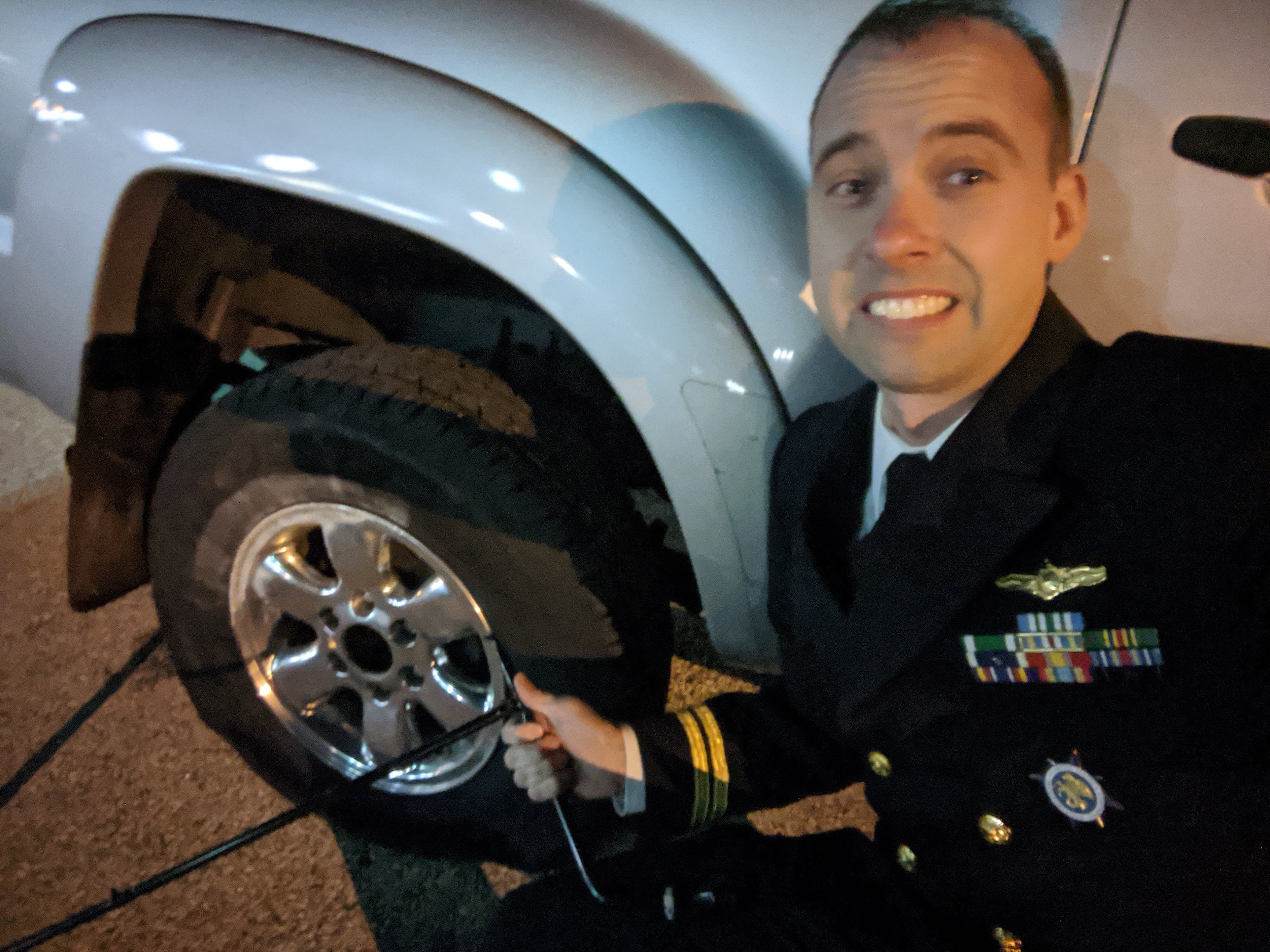 Attempting to change a flat time while in uniform

Lollipop #1 is doing awesome. She climbs up to the front seat and is exploring the glove compartment and watching videos on changing truck tires with me. She asks to play a game on the phone while I am outside, but my battery is already running dangerously low and I have no idea where in St. Louis we really are.

At this point, I am really weighing our options on showing up to this dinner. I would absolutely hate showing up late and walking in, in the middle of the awards ceremony. But, I am one of the award recipients, and this organization went to no small effort to host a special dinner and present awards.

Little did I know, the answer was about to be certain.

Eventually, the spare was out from under the truck. But while giving the crank a good turn, the seam in the back of my pants decided it had had enough of this nonsense and let loose.

I make one last valiant attempt to remedy at least a portion of the situation and finish changing the tire. But of course, I had to officially turn in my man card for the night, as I could not get a single lug nut on the flat tire to budge.

Back in the truck, I look at Lollipop #1, and tell her that we are not making it to the dinner. Talk about heart wrenching. Her optimistic, 8-year-old mind, wrapped itself around the situation, and accepted it for what it was. As consolation, I showed her how I split the back of my pants wide open … and all was once again good in the world.

At this point, we’d been sitting at the bus stop parking lot for over an hour. And now, we were going to call roadside assistance and give our plea for help.

45 minutes later, the event coordinator had another voicemail letting him we were not going to make it, the spare tire was on the truck, the flat tire was in the bed, and we were hungry. We found our way to a Chick-fil-A, ordered food and a giant milkshake, and headed for home.

Along the way, we made light of the situation and laughed about how this would be a night we would NEVER forget. It’s funny though, with all the craziness of that day, whenever that series of unfortunate events gets brought up and retold, there is (in my eyes at least) WAY too much focus (and giggles) on the fact that I ripped my pants while changing a tire.

For a night that was apparently never meant to be, it sure won’t be forgotten!

Smiles at the end of the night