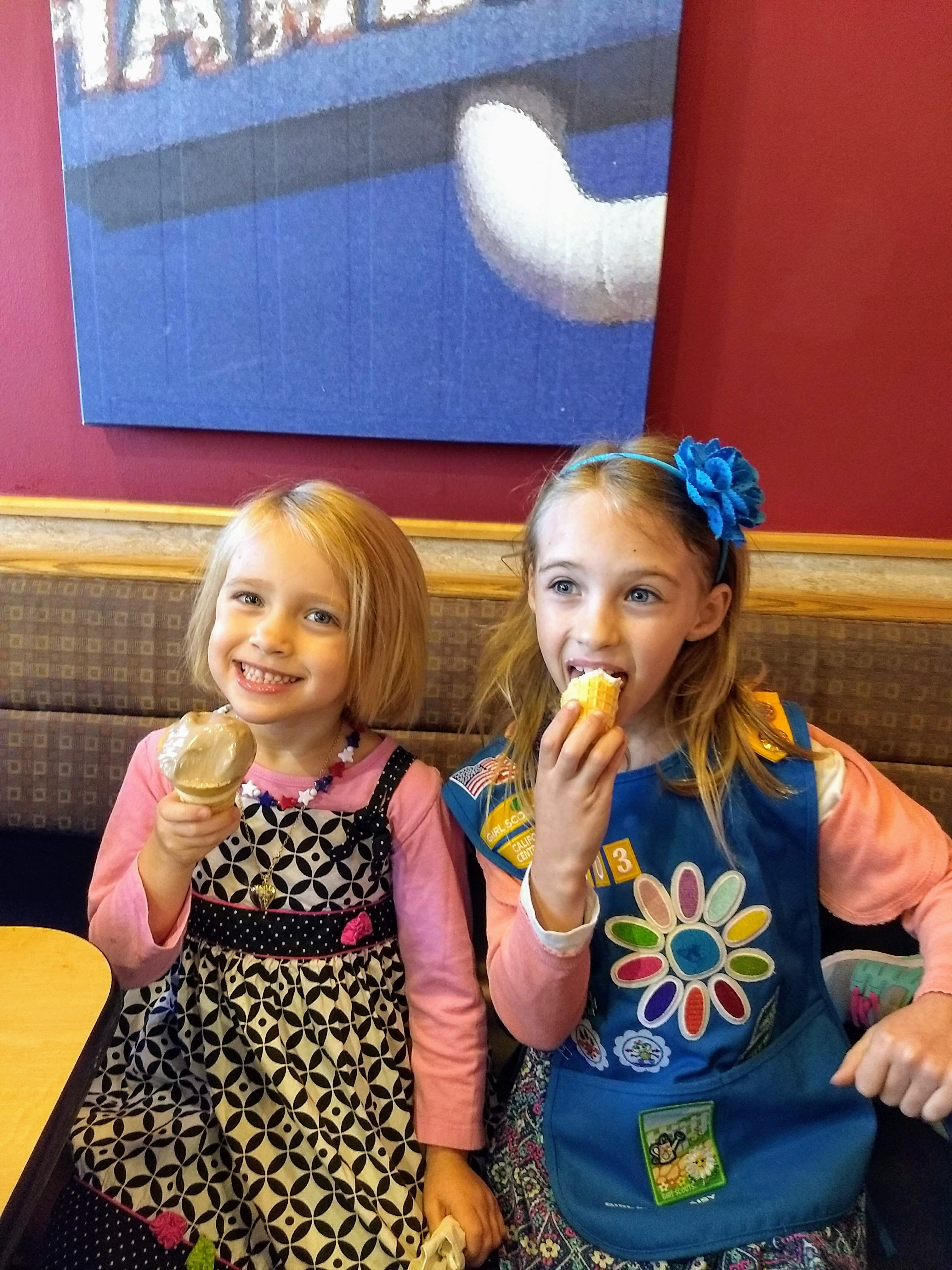 It is good to finally write this memory. It is a memory that I have longed for years to share. But it is not my memory alone. Just like details from this memory have blurred over the years in my mind, it was not until these last few weeks that the freshness of the memory softened enough for Lollipop #1 to give her blessing for me to share it publicly.

This memory takes us back to November of 2018. Lollipop #1 was seven years old at the time and was a Daisy in Girl Scouts. We were living in Illinois and even though Thanksgiving and Christmas were mere weeks away, I remember it to be an unseasonably warm day. It was a Saturday. Oatmeal and blueberries were for breakfast. And it was relatively early in the morning to be out and about… and eating ice cream.

All these details, while seemingly scattered, set the stage for what turned to be a day retold many times over the years.

Lollipop #1’s Girl Scout troop was invited to a local Dairy Queen. The invitation was for 9am on a Saturday, before it opened up for normal business. The not yet ice cream finger stickied glass doors were still locked when we arrived. But the swarm of blue, brown, and green vested Girl Scouts were soon ushered inside, followed by a mix of excited and sleepy siblings and parents.

Dairy Queen has a unique scent. I think it is likely the vanilla ice cream that subsumes you upon entry. And now I can speak on authority that no matter the time of day, regardless of whether the Dairy Queen has been open eight hours, one hour, or negative 90 minutes in this case, the scent, both quality and quantity, remains unchanged.

We all huddled in the “lobby” of the Dairy Queen, awaiting instructions. Lollipop #2 was also with us. Not yet in Girl Scouts, but ready to be included in the day’s festivities. The manager greeted everyone and quickly led groups of kids and adults, five to ten at a time, back behind the counter into the mystifying unknown. Wife and I did not take the tour, but both Lollipops disappeared with faces of anticipation and returned a mere three minutes later with faces of wonder, awe, and glee, with tall, already dripping ice cream cones in hand. They had seen the promised land and were pleased to find the milk and honey was actually generously poured ice cream!

Honestly, it was quite a fun experience. The girls had a blast. They toured previously forbidden areas of a place that in their minds was second maybe only to Disney World. And they walked away with ice cream. All before 9:30 in the morning! Life was good.

The ice creams were soon finished and it was time to move along. Our fun morning was scheduled to continue into a fun day as a local festival called “Salute to Scott” was set to start later in the morning. A tribute to everyone stationed at Scott Air Force Base, the flier advertised kids activities, entertainment, and food at a classic cars showroom. But we had time to kill before heading that way. So we set the GPS to a local park, Rock Springs Rotary Park, with a playground and trails. Perfect midpoint stop to let the kids run out their ice cream infused energy.

Along the way Lollipop #1 asked for a mint. This was a relatively new “thing” she was doing. On a recent visit from Memaw and Pepaw (Wife’s parents), Lollipop #1 had heard that sucking on a mint might help with car sickness. Having never suffered from car sickness in her life and always suffering from sweet withdrawal, she had decided that she was now afflicted with car sickness. Ugh. “No Lollipop #1” I answered flatly. “You just had a giant ice cream cone and we are still in the single digit hours of the morning.” I am sure she gave grumpy eyes at the back of my head. I think 2018 might have predated her eye rolling days.

Nearly there, we rolled past the crosswalks that guard the park into an empty parking space right in front of the playground. Perfect day for a playground. Coolness in the air with a warm sun heating our bodies.

“Dad?” Lollipop #1 whispers from the back seat.

Not yet even geared to park, I leverage myself on the foot brake and turn to look back, between the driver and passenger seats.

What happened next is an immense source of embarrassment for Lollipop #1. I mean everybody pukes. She’s a kid and kids seem to puke even more than adults. But Lollipop #1 for whatever reason does not like talking or hearing about puke. Not her puke. Not my puke. Not any person’s or any animal’s puke. Ok, at this point I’m just writing puke as many times as I can because I am a cruel Dad and enjoy tormenting my children. I’ll be very surprised if future Lollipop #1 is still in the same room when future me is reading this to her. Sorry Lollipop #1. Thanks for letting me share this story of life. And well… stand by for more puke.

My “yeah” response to Lollipop #1 had no sooner left my lips than when puke sprayed back across them.

It. Was. Everywhere. Oatmeal. Blueberries. Some mushed, some half chewed, some whole. And Dairy Queen ice cream. This was obviously a mix of breakfast that should never be. My face was splattered. I could feel it dripping off my nose. My lips were pursed, clenched together with anti-spew locks in place. Locks to protect from the puke that threatened to breach. And locks to dissuade any sympathy puking reaction that might cross my gut. I could see and survey the damage to the back of my seat, the ceiling of the van, the uncertain face of Lollipop #2, and the petrified face of Lollipop #1. And I could smell that distinct Dairy Queen vanilla that had been oh so pleasant just 20 minutes prior.

In a state of shock I turned back around, calmly shifted the van into park, released my right foot from the brake pedal, and stared out the front windshield. I think shock had overtaken the entire van. No one moved and no one said anything for what seemed like an eternity. But then the spell was broken by the sudden and boisterous howling laughter of my not puke-covered Wife. Boy, was she having a party over there in the passenger seat. She was looking at me with the happiest of tears in her eyes in an uncontrollable laughing frenzy.

Wife and I have always endeavored to have positive, or at least not overly negative or concerning, reactions when things happen to the kids. They fall down while skating? No running to them with concern to pick them. We try to make light of the situation and not let shock or fright always turn to tears. But this was no intentional laughter from Wife. This was belly aching, side splitting, cheek burning laughter that was natural and raw.

While I endured Wife’s laughing fit, I wished I had taken notes from the many ventriloquists we’d seen on America’s Got Talent. I needed to talk. But no way was I opening my mouth. “Mm mmmmmd mmmkmmmmns,” was all I could say. Finally Wife returned to the reality of the van and realized I was attempting and failing to communicate. She realized that I was in fact looking for napkins to clear my puke glazed lips. Wow, that ice cream was sticky!

Wife found napkins, I cleared my face a little, and I finally and gratefully relieved my nose of its breathing duties and became a mouth breather for the time. Wife was all smiles next to me pointing out how clean the dashboard and entire front seat of the van was; congratulating me on my successful block (except for spray patterns on the ceiling). We had also opened the van doors allowing fresh air to replace the vanilla air that plagued our senses. Just outside Wife’s door a truck had pulled up. It looked to be a work truck and a work guy had just stepped out the driver door. I don’t know what caused the conversation. Perhaps Wife was just too excited to share the recent turn of events or maybe Work Guy had just looked into our van and realized the happenings. But he offered up a number of clean fabric towels he had with him in his truck for cleanup.

Wife started cleaning the van and Lollipop #1 and I left the van to look for a bathroom. We set off towards the opposite side of the playground where a building stood. Once at the doors to the building, we saw there was actually a gathering going on in the building. I didn’t see bathrooms anywhere else and could only assume there were bathrooms in the party room. So I opened the door and ushered Lollipop #1 inside.

The party was definitely a family reunion of sorts. We stepped in and the door closed behind us. There were perhaps 20 people, no kids, mostly elderly, sitting at tables chatting loudly with each other. All conversation ceased and all eyes turned to us.

“You mind if we use your bathroom?” I asked politely, not really caring what their answer would be.

“Sure,” responded an unknown voice from the crowd.

Lollipop #1 and I walked over to a bathroom door and the same unknown voice said, “You want a donut?”

“We’re good,” I said and closed the bathroom door behind us to more howling laughter.

It was then that I got a good look at myself in the mirror and a smile broke across my face. No napkin and no cloth rag had done justice to cleaning my face. I had done all right on my nose and mouth, but my forehead, ears, and now-crusted hair all needed some immediate attention.

Lollipop #1 and I got ourselves cleaned off, egressed the raucous reunion, and made it back to the van. Wife and Lollipop #2 were in such a good mood. And by this point Lollipop #1 and I were in an ok mood as well. Lollipop #1 seemed to be feeling better, we were now the proud owners of a pile of no-longer-clean fabric rags that Work Guy did not want back (Wife did in fact ask), and it was time to call it a day and head home.

Once home, outer clothes were left in the garage, and I took a long hot shower washing my hair and face no less than four times. The rest of the day was chill and we even set up the Christmas tree to move right along and kick off the holidays. 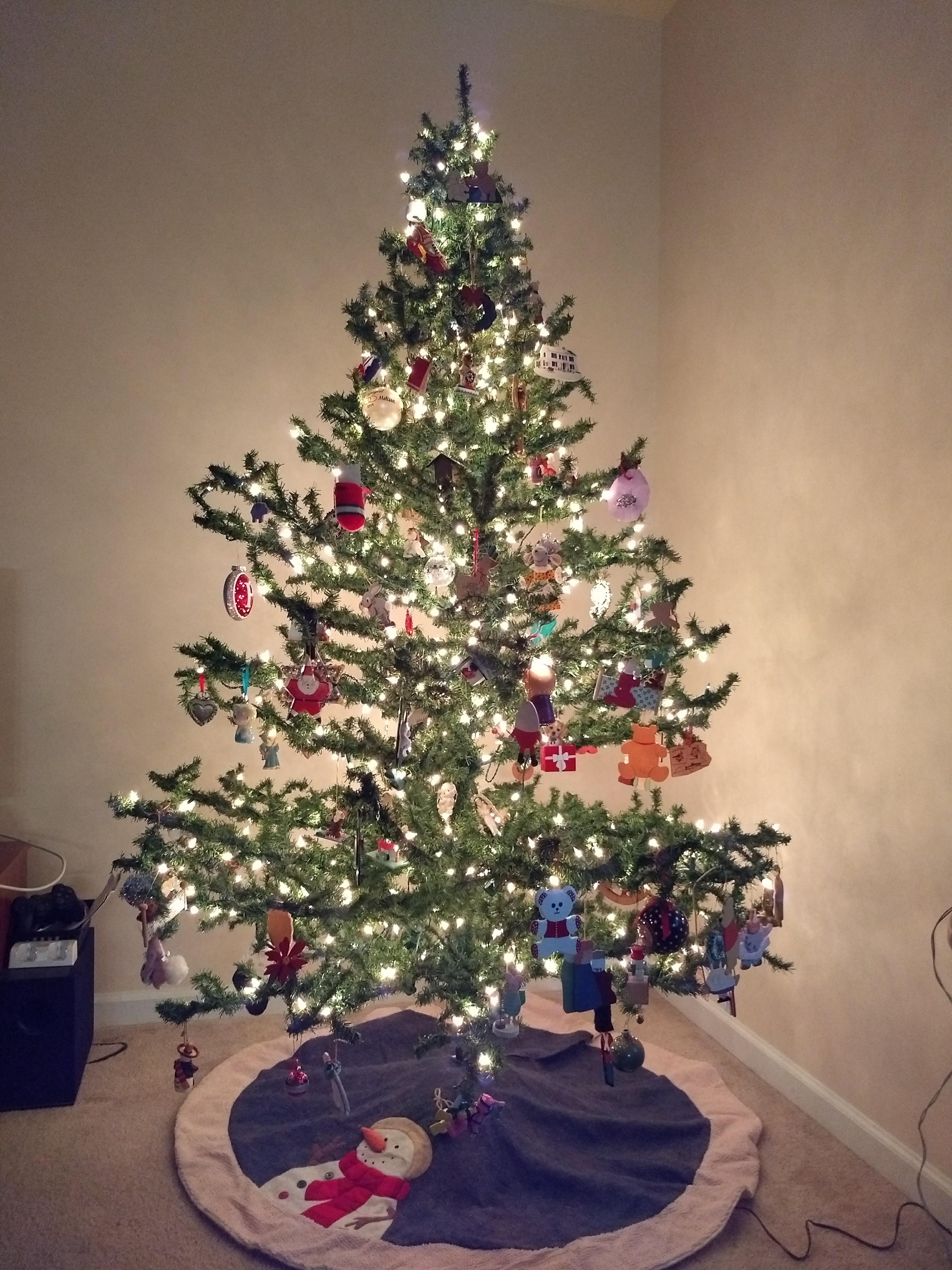 I love this story because it is truly a shared family memory. It was gross. It was messy. It was traumatic. And it did not feel good at the time. But that’s life. And you know what else is interesting about this memory? I guarantee my retelling of this Saturday morning at the park would be different than a retelling from Wife, Lollipop #1, or Lollipop #2. But no matter our perspectives, sentiments, or details remembered, the experience is rooted in something to which we all participated. And that brings the family closer together, a bit like an inside joke.

So I am glad to finally share this memory. And I am glad Lollipop #1 can get past the embarrassment. But why do people feel embarrassed? Shame, mostly. But Lollipop #1… there is no shame in this story. Just a lot of vanilla scented Dairy Queen ice cream puke :-)