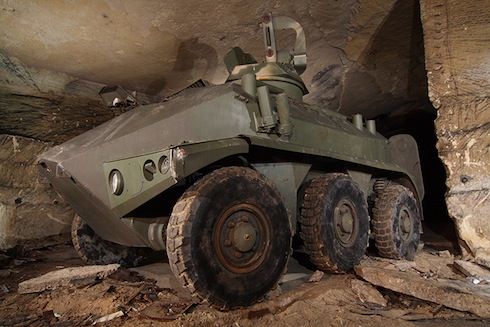 This is every kid's dream.

It sure is!  The title is enough to wet anyone’s appetite for adventure.  Cue imagination and hold on tight, this real life secret underground military bunker was stumbled upon in France.

Now for the best part. Not only are you having a blast pretending to be Indiana Jones exploring a once-secret military bunker, you come across abandoned military equipment! You first come across a rusting pair of German 77-mm cannons from World War I. It gets even better, as you move further throughout the bunker you come across relatively new French military gear that’s in great shape considering that it’s been sitting underground for years. You round a corner and right in front of you sits a six-wheeled French ERC-90 Sagaie armored reconnaissance vehicle, sadly it’s lacking the 90-mm cannon that the vehicle is normally armed with. Next you come across a Panhard VCR armored personnell carrier that’s in nearly perfect condition and finally a old military truck.

If only the walls could speak…

Since they can’t, here is an article with more snapshots from defensetech.org.