Note: This post has been imported for “completeness” of my blog. It was originally posted on a different blog, “The Hushed Allegory”. But as time has moved along, this blog seems to be my legacy of sorts. So, I think it is fitting to roll this post (along with a few others) into these archives. The original “genesis” of this blog was the post titled, “Delighted to meet you…”. 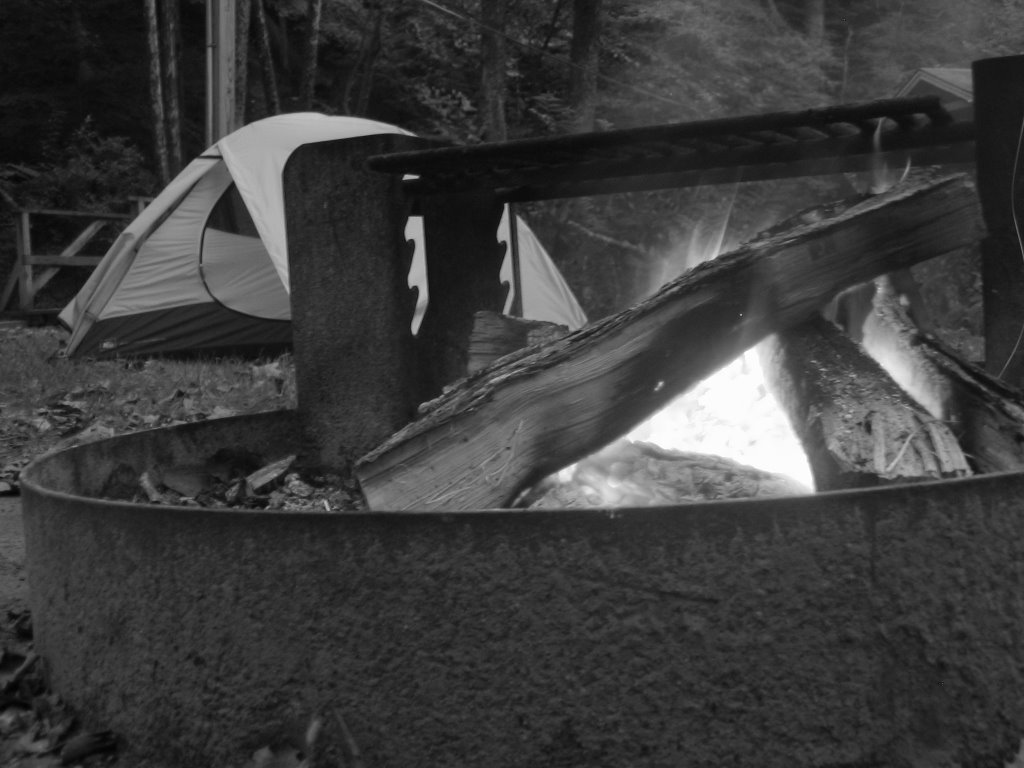 The engine was cut and the doors opened letting the brisk autumn air creep into the car. It was an early Friday morning and the great out doors had just welcomed us with a kiss of its cool lips. Leaves were already drifting aimlessly to the matted grass even though October was still a few weeks away. Around us, great trees seemed to guard us from all reality while giving a sense of comfort and serenity, letting us know, that we could unload and settle in. Very few sites around were occupied being so early on a Friday morning, most of our neighbors most likely remaining at work or school until mid-afternoon, then finding path to their weekend get-a-way with nature.

Crunching through dying grass and fallen leaves feeling out the site, we look for the flat ground to lay our tent. The site itself was meant for a camper of mediocre size, however, with a overheating Jeep the previous day, tent camping was the end result. Finding a nice level spot near the creek, my brother and I unloaded the tent from our old Cavalier which seemed to look lost with the scenery of wilderness surrounding its city facade. With each step and each fresh breath taken, I knew the weekend would be one to remember.

My brother, Dan, was just recently engaged, so I knew our days of brotherly bonding, as one might say, were drawing to a near close, as he moved onto the next chapter of his life story. This weekend was meant to be a week long excursion through the Appalachian Trail in the Smoky Mountains of Tennessee, however, just as plans are meant to be broken, they were indeed.

We are whistling brothers, its something that we’ve always done both consciously and unconsciously. Others make reference to it a bit, but like I said, its something we do. Naturally we whistle as we set up camp. The tune isn’t in unison between our lips, nor is it even in the same key. We are different, we live daily by our own books, but it doesn’t change the friendship that we have between us. Too many friends have I heard say they can’t stand their siblings, and every time I lack the complete understanding. My family has always been close, and I suspect will remain that way for all the years we have even as some move away with their own new family. My brother and I have always been close. Yes, 2 1/2 years apart, but close in a let’s go grab a bite to eat, or let’s catch a round of golf this weekend, and closeness of blood and friendship together, a closeness that should never be taken for-granted.

The site was set up, along with an early lunch on the table, and bees in the air. I am personally not a big fan of bees. Most bugs don’t bother me all too much, but I have had my run-in with bees that left a mark mentally and physically. A few years back when at camp with the high school marching band, we lowered the basketball hoops to bring a new intensity to the game. When going up for the behind-the-back dunk, not only did I make the basket, I made a nest of bees and wasps not too happy. Two stings later on the hand, I was a little slower, but still in the game. Never before had I had problems with stings. I’d had them everywhere from arms and stomach to the bottom of my feet while walking out to a swimming pool barefoot, but this time the juices of the wasp and bee together didn’t settle too well. Within the hour, people were commenting on the swelling of my neck… and that’s all the detail that needs to be taken there.