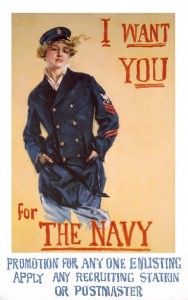 The last few days of This Day in US Navy History had an interesting theme among some of the bullets: Women.

On 21March1917, Loretta Walsh became the first female Navy Petty Officer when she was sworn in as a Chief Yeoman (link).  She was also the first woman allowed to serve in any of the US Armed Forces as anything but a Nurse (link).

On 19March1917, the Navy Department authorized enrollment of women in the Naval Reserve with ratings of yeoman or radio electrician (link).

Now I am sure I am just scratching the surface here, but just a few weeks later on 06April1917 the US declared war on Germany in WWI, and if I had to guess, there was probably a lot of push for this to happen because of the imminent war ahead.  This mirrors the civilian sector where many women were moving into jobs typically held by men such as mining, chemical manufacturing, automobile and railway plants.  This also includes the political world where Jeannette Rankin of Montana became the first woman to be elected to Congress (link).

The irony of the last point slaps you across the face, though, when you realize that the 19th Amendment to the United States Constitution (women’s suffrage), was not ratified until August 1920 (link).

I’ve been on a history kick lately and loving Khan Academy’s history lessons.