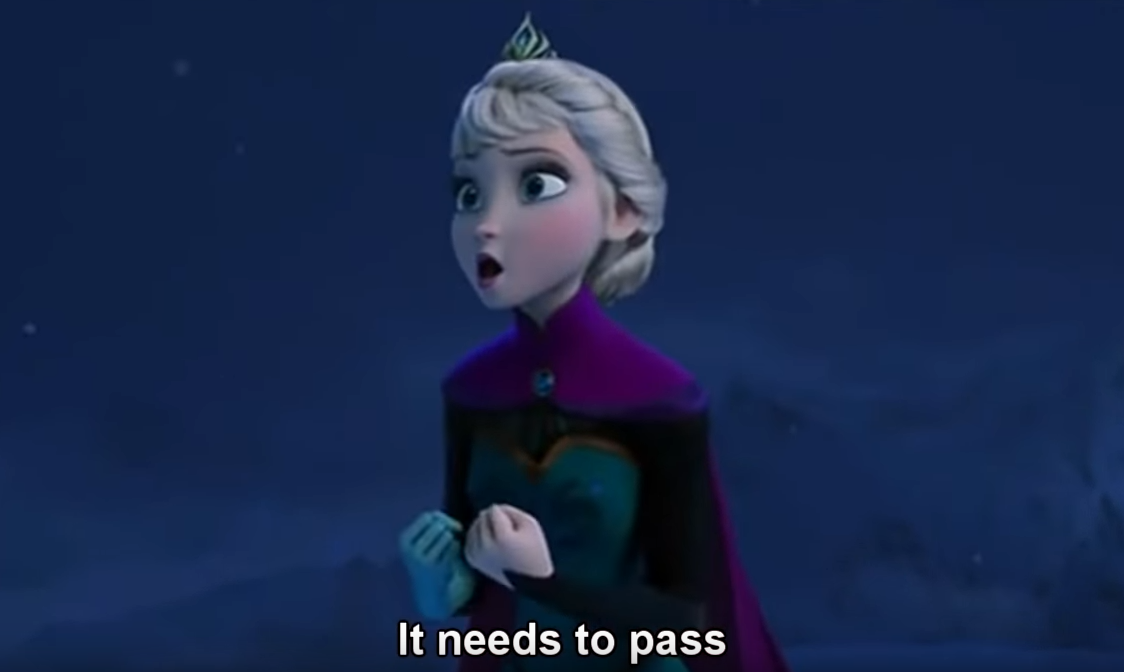 Elsa: It needs to pass

Just one thing that could unite peoples from all countries regardless of race, religion, or ethnicity…

Just one thing that is truly timeless across all generations…

Tonight was just another ordinary dinner around our dining room table. Wife, Lollipop #1, Lollipop #2 (formerly known as Little Lady and Baby, because Lollipop #2 is no longer a baby and their Pepaw now calls them Lollipop #1 and #2, which for a reason I have yet to realize find actually quite endearing), and me, are eating our ravioli (not lasagna, different story for a different time) and green beans.

The kids were regaling the day’s events, grabbing my mind’s hand and leading me through their adventures with Mom, when a strange thought entered my brain.

… I bet there are some really funny songs about farts.

Now, I could not tell you why I thought of farts, much less songs about farts. Was it Lollipop #1’s pontifications on why giraffes have long necks? Or was it Lollipop #2’s deliberation between what holiday or event the colors red and yellow, together, best represent? Whatever it was, the moment is now lost to my memory. But fortunately for you, the scent of the moments that followed remains.

Where were we? Oh yeah… farts!

I dove into my pocket and a quick YouTube search (yes at the dinner table, don’t judge) later, the most perfect of pictures appeared before me.

That’s right … A Frozen parody on the topic of farts. As the Daddy of two little ladies, pure joy at my fortunate find filled my heart.

At this point, my family had no idea what crude humor had filled my brain. They only knew I had a song I wanted them to hear and that I was giddy with glee over what I had found.

Now, in my defense, I was a bit nervous about hitting play on a video for my Lollipops’ innocent ears to hear without my prior review. But, it’s Frozen … it’s farts … how bad can it be … what vile lyrics await us? Eh, it’ll be fine …

The girls were duped rather quickly by the recognizable prelude. It wasn’t until their well trained ears picked up the difference in Elsa’s voice that they knew something was awry. Once they realized the lyrics were a bit off … they knew Dad was up to something.

Like any good story, the song builds suspense before the inevitable ‘toot’ lets loose and Dad claims victory at finding a hilariously inappropriate song for the dinner table. It isn’t until exactly 1 minute and 1 second into the song (ok, it’s my new guilty pleasure) that the first audible fart is heard and giggles bring smiles and smiles bring laughter and laughter ultimately leads to said peace on Earth (or at least a happy household, for which I will settle).

57 seconds, however, happens before 1 minute and 1 second. At 57 seconds there is a cruel twist of fate where in some alternate reality Dad doesn’t claim victory and instead claims the couch as his bed for the night. At 57 seconds, Dad’s awesome thumbs that brought forth this hilarious dinner expedition were detoured to frantically stabbing the screen in search of the pause button.

Let me rewind a bit…

56 seconds. So at 56 seconds, the phrase “It needs to pass, from out my…” has just been sung setting the obvious flatulent related rhyme. Now at 57 seconds Elsa is holding onto that “myyy” syllable like the poor Dad that clicked the play button’s life depended on it.

Remember how I don’t remember what the kids were talking about when songs about farts first came up? Well here’s another blank in my memory. Genius and panic, turns out they both erase memories! So I can’t tell you if I yelped or yodeled to drown out the impending word and I can’t tell you how many times I flapped my thumb against the screen hoping it would somehow find the pause. It might have been three, it might have been thirty. All I know is I’ll be starting a lawn care business this Summer with the flock of sheep that are now congregated in my front yard. But the next thing I know, the music is silenced, my ears are burning and Wife is across the table uncontrollably laughing at my misfortune, while holding perfectly stable her phone to immortalize this moment of parenting failure.

In an attempt to regain what little control I ever had of the situation, I slowly look down at the subtitled lyrics on the video to see if my attempts successfully averted disaster.

Oh well. If laughing at farts is not enough to unite all the peoples of the world, perhaps my silly antics will be enough to buy at least a few minutes.