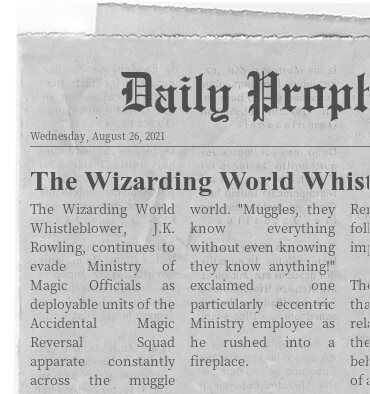 My family loves the Harry Potter series of books. It began a few years ago when we attended a “Harry Potter Night” event at the kids’ school. Themed activities were stationed around the cafeteria, gymnasium, and multi-purpose room. Crossword puzzles, scavenger hunts, wand craft stations, you know … typical Harry Potter event type stuff.

It was after this event we decided to actually read the Harry Potter books. I, myself, had read the first few books of the series when they were originally released. I found them interesting and engaging, but apparently not enough so that I continued devoting time to the remainder of the books. Wife had not read any of the books but was familiar with the epic from a few of the movies and, well, you know, being alive in the late 90’s and early 2000’s.

So we made it a family activity.

We read the books together, aloud. Or at least we did for the first four books. Once the plot took the darker turn from innocent, “You’re a wizard, Harry” to oh, I don’t know, anything with Bellatrix Lestrange, Wife and I continued the books on our own giving carefully curated summaries to the kids.

Even after we read through all the books (June to September of 2019), the Harry Potter craze in our house only intensified. And as I reflect back, it baffles me how much Harry Potter themed everything we have undertaken in only two years.

My journey into the Harry Potter Universe, this time, with kids in tow, has been much more intense than my initial escapade. There’s something about having a pre-12-year-old state with earnest expectation, the certainty of a future letter from Hogwarts, delivered by owl, requesting their enrollment.

It was this certainty that gave me a recent pause to ponder the potential reality of the situation. What if she’s right? What if “déjà vu” does not exist and is simply glitches in the … wait, wrong storyline. What if some unexplained phenomena are actually the result of unintentional spells. What if witches and wizards interact with each of us on a daily basis and we, ignorant muggles, are none-the-wiser. What if “Harry Potter and the <fill in the blank>” has been mishelved the last 24 years in libraries across the world because, in fact, J.K. Rowling has woven a whistleblowing tale of truth right before our very eyes!

So yeah, what if J.K. Rowling is the wizarding world whistleblower version of Edward Snowden? What if she has circumvented all Ministry of Magic protocols implementing the International Statute of Secrecy to give us muggles a glimpse of the world we are forcibly blind to seeing. Maybe she’s a witch with a political agenda? Maybe she’s a squib with a grudge? Maybe she’s just a muggle, in-the-know, attempting to spread truth and transparency based on her own judgements? Or maybe, just maybe, she is a third party of the wizarding world, whose story is not shared in the seven-book series. A group of “somethings” who capitalize on painting the portrait of good vs evil as best depicted in the Battle of Hogwarts. A group whose agenda is progressed by simple minded muggles being made aware of, but coached to believe as fantasy, the likes of Harry Potter and Tom Riddle.

The Ministry of Magic may very well have been reacting to these leaks for many years. The wide dissemination of the story and intense, cultish adoption by muggles, likely make the cleanup near impossible. The impact of these leaks to the wizarding world is probably largely unknown to those outside the Ministry of Magic, even to those witches and wizards whose safety and security are impacted.

Sometimes it is difficult to draw a clear line between imagination and out-of-the-box thinking. We encourage critical thinking and rational decision making. But those actions are rooted in our own realities, which is not truth, but subjective and developed from experiences. Where does a thought exercise turn into conspiratorial theorizing? I’m not sure, but I am sure the Accidental Magic Reversal Squad will set me straight soon.

PS. This post has NOT, I repeat NOT, been influenced, updated, or modified by any make believe organization called the Ministry of Magic or its subsidiaries. I assure you this post is a work of fiction, just like J.K. Rowling’s fantastical rantings on the so-called-wizarding-world. Go spend time doing wonderful muggle things and not looking further into absolutely false musings of nonsense magic. That is all.