About a week ago I watched a video on You Tube (http://www.youtube.com/watch?v=gLLzV5qeKyk) and was very impressed.

Photos are compiled by location, lighting, colors and all that such to create a 3D look and walkable environment.  Say you are at the Eiffel Tower in Paris, France.  On all the walks around it, thousands (probably millions… billions?) of pictures have been taken.  This new application would take those pictures and sync them together so that a viewer can walk around the Eiffel Tower, look left, look right, and hopefully be able to see all the surroundings.  But it is daytime… what about the lights of the tower and area?  No worries, just switch over to night view.

This entire concept relies so heavily on the community of the site, in this case Flickr, to be good community citizens and make sure they tag where their photos are located.  I don’t know all the details of how they are doing this or the ease, but that seems to me to be a big speed bump.  Not only does the exact relative location (I say relative, because cameras have zoom, right?  So a GPS in a camera may not be completely accurate of what the picture represents) but they also need to know the perspective.  Is this person facing west?  South-west?  12 degrees north of East?  A very super complex implementation and algorithm must be in use.

But telling you about this new Flickr application isn’t the purpose of this post.  On the front page of Google News today, I found an article talking about Microsoft’s new photo site (which looks to be exactly like this Flickr application), Photosynth, and how it spent a good portion of its first day offline (http://ap.google.com/article/ALeqM5g1xnse3uheAg9QyhFY9nrf5VCPJQD92MUI581).  But talking about Microsoft’s inability to predict bandwidth isn’t even the purpose of this post (especially after certain iPhone 3G and MobileMe disasters…).

The purpose of this post is to share a funny screen shot that I found while visiting photosynth.net.  I hadn’t gotten very far into the site… I had clicked on a link to go past the welcome page.  And I got a message saying that Photosynth isn’t supported on Mac OS X yet.  Well I should have seen that coming.  Many things, including MSN games are not available to Mac users (last time I tried at least).  But the funniest part was how they told Mac users that they weren’t supported.

Unfortunately, we're not cool enough to run on your OS yet.

Hey, it is their words… not mine.  I’m not sure what Microsoft is trying to say with that either.  Are they trying to make fun of the image they (and Apple) has created for them, of being old… full of legacy software… out of touch (wow, sounds like the John McCain news articles today…)  Or maybe Microsoft has fully come to the realization that they just aren’t meant to be ‘cool’.  Microsoft has some great products, one of which I hope to be Photosynth.  I am looking forward to playing with it.  I will most likely hop on my worn out Toshiba with XP this evening and have a go and see what it is all about.

Check it out, what do you think? PS. Enjoy the screenshot incase Microsoft decides that marketing themselves to be not as ‘cool’ as the Mac really isn’t a good strategy. 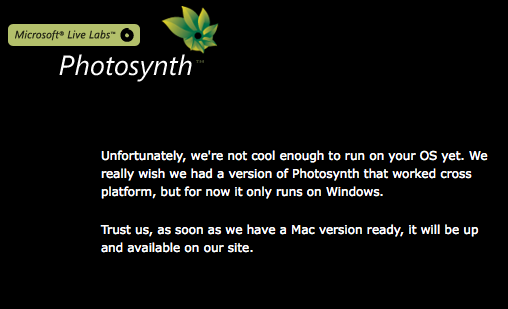