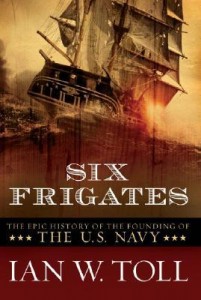 Wow … Six Frigates by Ian W. Toll was a marathon read.  And not like a sitting for 26 hours straight never wanting to put the book down.  More of the … took somewhere near 26 week sto read…

Don’t get me wrong.  I thoroughly enjoyed the book and I learned A LOT from the 482 pages of riveting Navy history. It was just a long read.  And it read a bit like a text book much of the time.

Before the ink was dry on the U.S. Constitution, the establishment of a permanent military became the most divisive issue facing the new government.  The founders -- particularly Jefferson, Madison, and Adams -- debated fiercely.  Would a standing army be the thin end of dictatorship?  Would a navy protect from pirates or drain the treasury and provoke hostility?  Britain alone had hundreds of powerful warships. From the decision to build six heavy frigates, through the cliff-hanger campaign against Tripoli, to the war that shook the world in 1812, Ian W. Toll tells this grand tale with the political insights of _Founding Brothers_ and the narrative flair of Patrick O'Brian

So those were the words from the back of the book.  And yes that’s the basic premise of the book, but it doesn’t really do the pages justice.

Where this book really wins its praises is the complete detail and recollection of events from the stories that are told.  When the USS Constitution trades broadsides with the HMS Guerriere, the battle that gave the Constitution her nickname, Old Ironsides, the detail of the battle is told play by play without a hint of emotion.  Just like a good history book should.

This was a fantastic read as a refresher for the beginnings of our GREAT Navy.

Some of the details that I liked best in the book were when a particular person was tracked throughout many pages.  I enjoyed the details of a newly appointed Captain’s service in such a such battle previously.  I also enjoyed some of the letters of Sailors back home or in personal journals.  It gave quite a picture of what life was like in those early days.  The brave men that served with little thought towards their own personal safety.  Often made me wonder how life really was valued then.  Was it just a normal day when people all around you are getting blown up, heads being shot clean off bodies with 12 pounders, limbs and brains spewed across the deck…

One interesting bit that was a theme throughout the entire historical record was (and still is in current day) money.  The use of privateers to keep government spending low.  The thought that a frigate sent afloat should fund its own deployment by capturing merchant ships or enemy war ships for prize money.  Those acts of piracy, and the thought that the Navy operated with a dollar sign as a bottom line are rather foreign to today’s Navy.  Yes we worry about money, but there is no expectation that the Navy will fund itself through its actions.

I’m coming away from the book with a lot of look-ups and future reading items.  But I am also coming away from it feeling much better about my awareness of early Navy history.  One of the coolest things about being a Sailor in the US Navy is the heritage and history that comes with it.  There is a lot of past behind the Navy and seeing where I fit into the timeline is fascinating beyond belief.  The pages of Six Frigates was filled with issues that seemed eerily similar to modern day national news.

So you want my recommendation?  If you really have an interest in learning about US Navy history, read it.  Definitely read it.  It may take some motivation to get through, but keep at it.  Each section of the book could probably stand on its own, but is augmented greatly by the others.

If you don’t really fancy investing many hours on the topic, this may not be the book for you.  I’m sure there are many other books that gives a dusting compared to this one.  I hope to find some of them and read them as well.  This book just wet my appetite for more.

I will probably take a break from reading Navy history for a few books, though.  I have some others to get through but I do have some DVD’s that will be a great follow-up to this reading.

Take care, if you have read or do read Six Frigates, feel free to leave a comment below with your thoughts.  Until then…