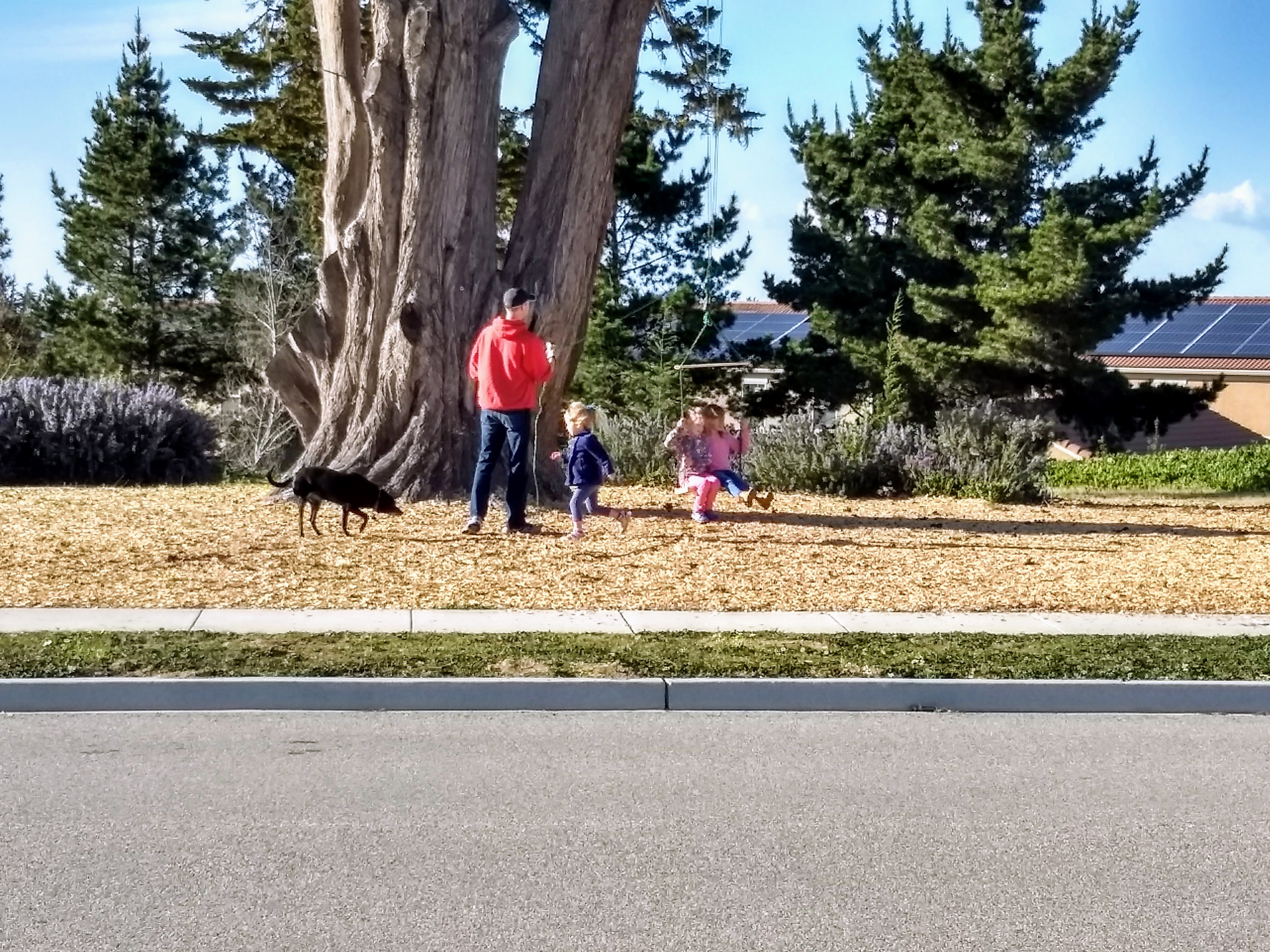 We all remember doing dumb stuff as kids. Stuff that really makes you give thanks to your guardian angel (or angels for some of you…) and ultimately makes you wonder … where were my parents?

As a parent, I often find myself wondering what on earth my kid was thinking when they made a particular decision. Much of the time, I think it is evident that they were not thinking about anything! But as I reminisce, I can recount a number of occasions where my parents must have shaken their heads in awe … of my stupidity (at least for the ones they know about)

There was that one time my older brother and I were playing the game “who can crash their sled while zooming down a snowy hill the most awesomest?” Have you played that one before? It was awesome! What was not awesome was playing the game on a metal sled and deciding to flip off the front and have the sled run over you … metal runners right across the face. Stupid.

There was that other time my friends and I took my not-off-roading car into a muddy lot in a neighborhood under construction. We didn’t know how to drive in the mud. And we obviously had no plan in mind as my top-heavy car scaled a hill sideways and nearly flipped. We and the car somehow survived, but again the label clearly applies… Stupid.

There were those many times that I was running late for school on a frosty morning and instead of scraping the entire windshield and windows clear of ice, I basically cleared a big enough opening for me to see the road in front of me. Stupid.

There are many other memories rushing to mind, quite a few involving a bike, a few more involving cars, and even a few that will remain locked in the brain vault and nowhere near the Internet, forever.

Now, as a Dad, I feel there is a delicate balance between two different responsibilities. One, I have a responsibility to protect my kids from themselves. Every kid has a certain amount of stupid (yes, inexperience or immaturity is probably a better term) in them, and some of that stupid is a bit more dangerous than other bits. Keep your kid alive, that is like rule #1 of being a Dad. But there is also this term Wife and I love to throw around, “natural consequences”. We think of natural consequences as Darwinism short of death. Me running a metal sled over my eyeball was a natural consequence.

And that is where the other responsibility comes in. I believe I, as Dad, have a responsibility to encourage and enable my kids to explore that line of stupid so that they can best understand their capabilities and make responsible decisions when I am not around. I like to think of this responsibility as allowing natural consequences to happen, when, even though it may result in tears, scrapes, or hurt feelings, also results in a learned lesson.

So… I guess now is the confession part…

I think, now, is as good of a time as any, to submit, as evidence, to the record of the Internet, I crossed that line, and boy am I glad we all learned our lesson with only needing ice packs. 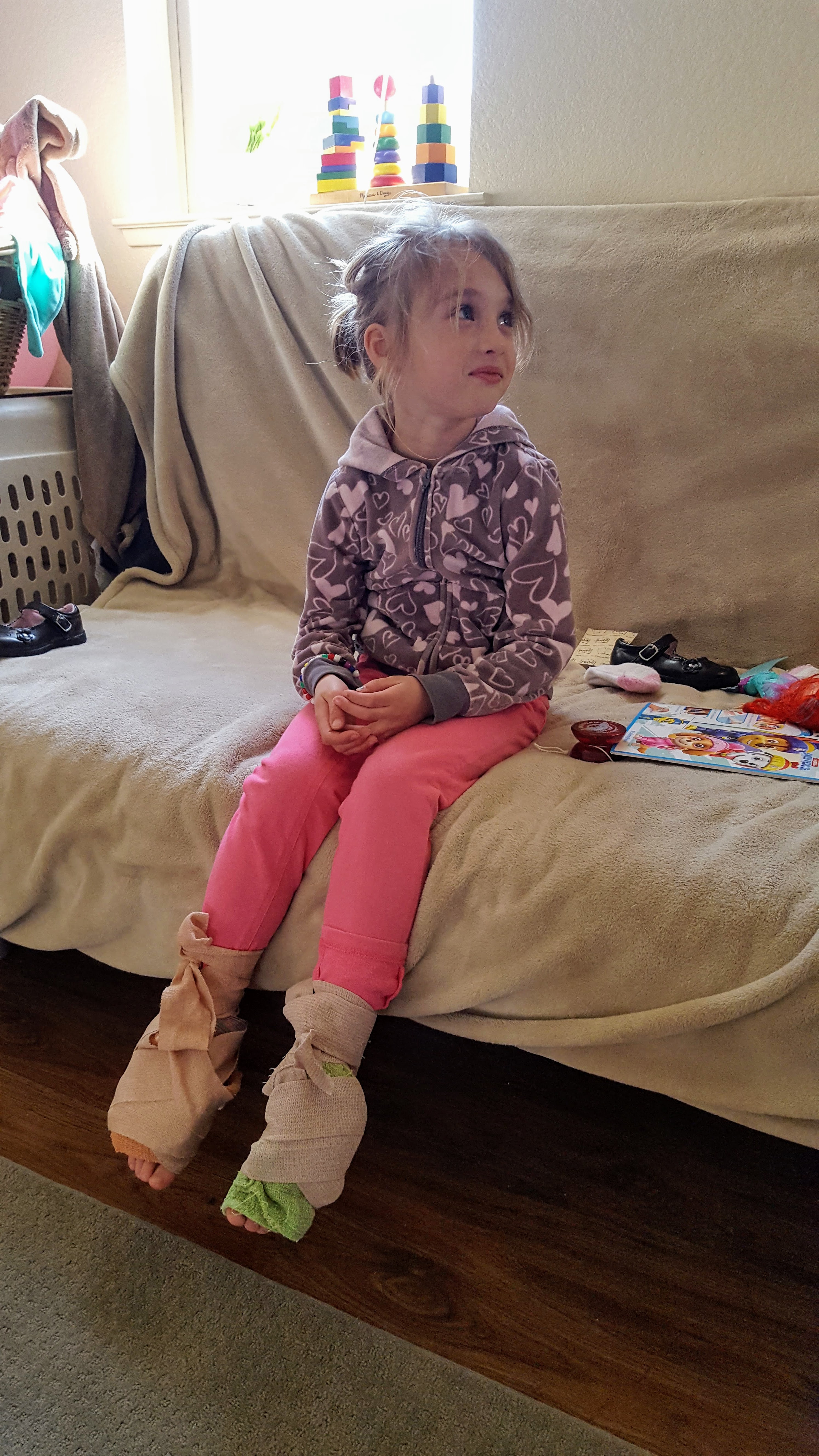 There we were, a few years ago, living in beautiful California on the Monterey Peninsula. We moved into a house and across the street was a HUGE and beautiful tree. 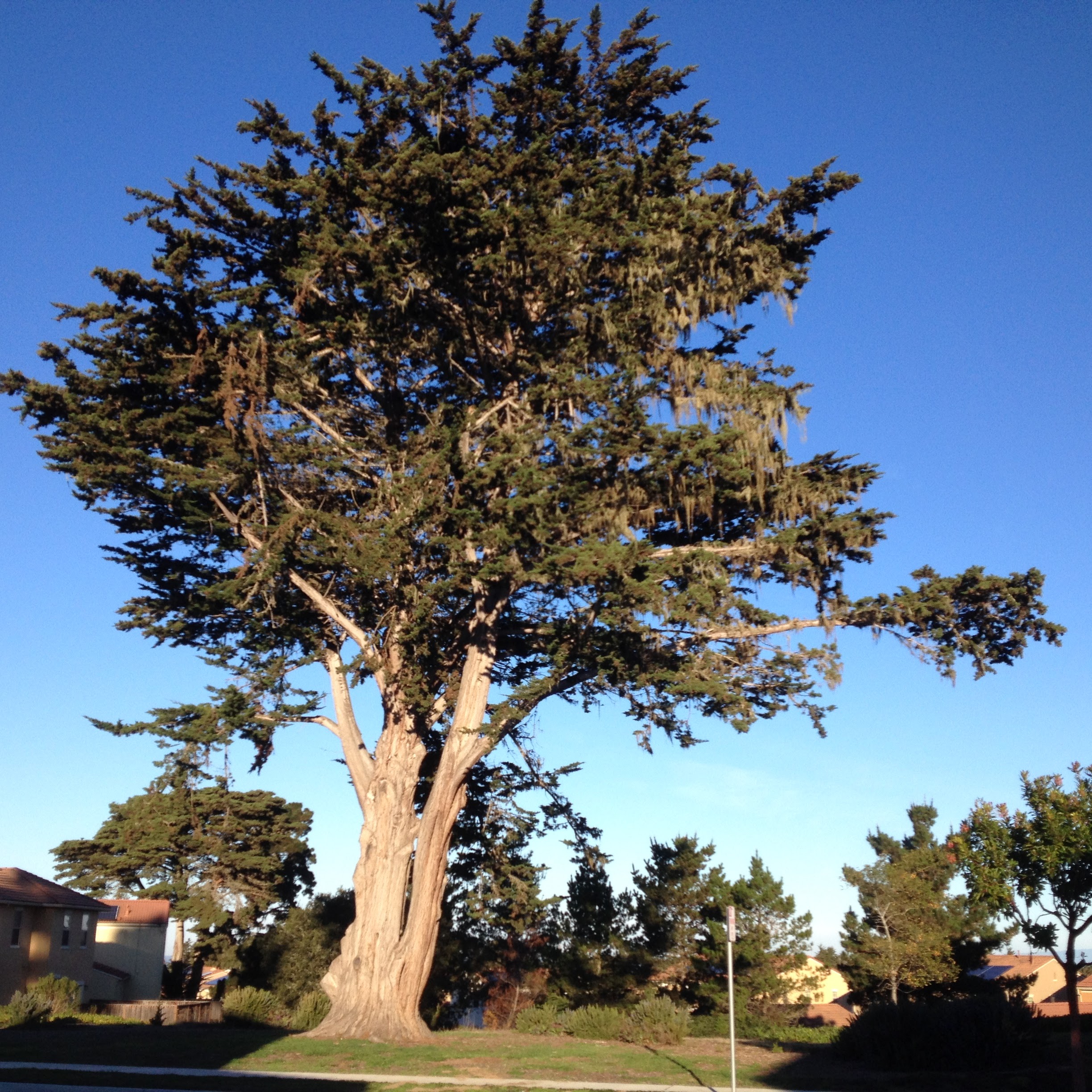 Now I do not know what you see when you look at that tree. But what I saw was a missing tree swing.

I had never made a tree swing. But I am a smart individual, how difficult could it be? And you know what, it was not that bad. After buying some rope, I drilled some holes in some scrap wood we had lying around, tied some knots, put a ball in one end of the rope to be able to launch it over a branch, and there we go! 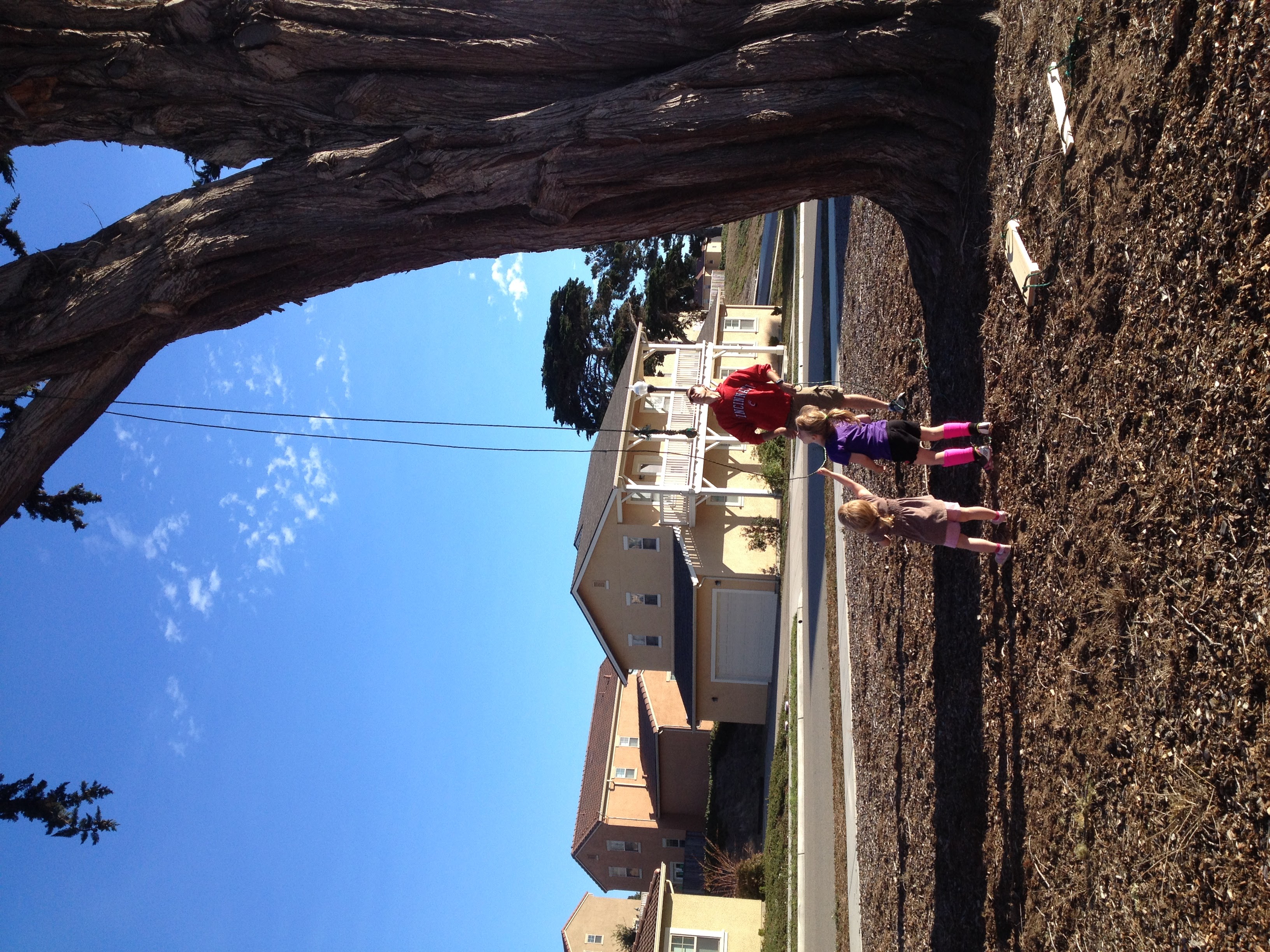 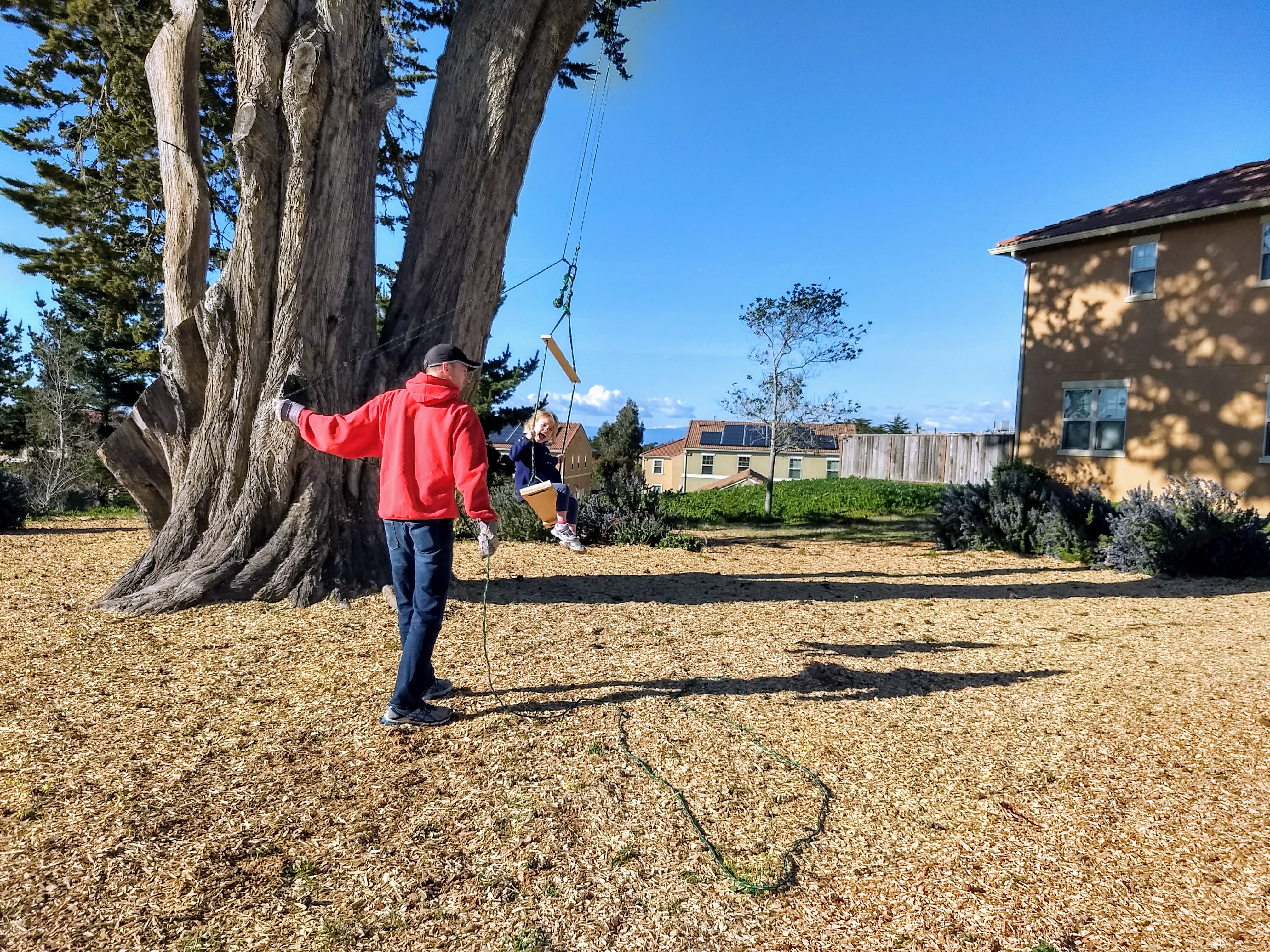 The kids did love it. They (and Wife) were quite cautious at first. But with my encouragement they were soon zipping through the air screaming “HIGHER!” And who am I to refuse my children this request?

Hindsight is a funny thing. In hindsight, it is clear to me that those parents driving by in their cars were not marveling at my genius but more likely concerned with my explicit level of stupid being showcased. A few of them, I’m sure, meant to call Child Protective Services when they got home, only to be distracted by their own kids running off to attempt rappelling out of the upstairs bathroom window. 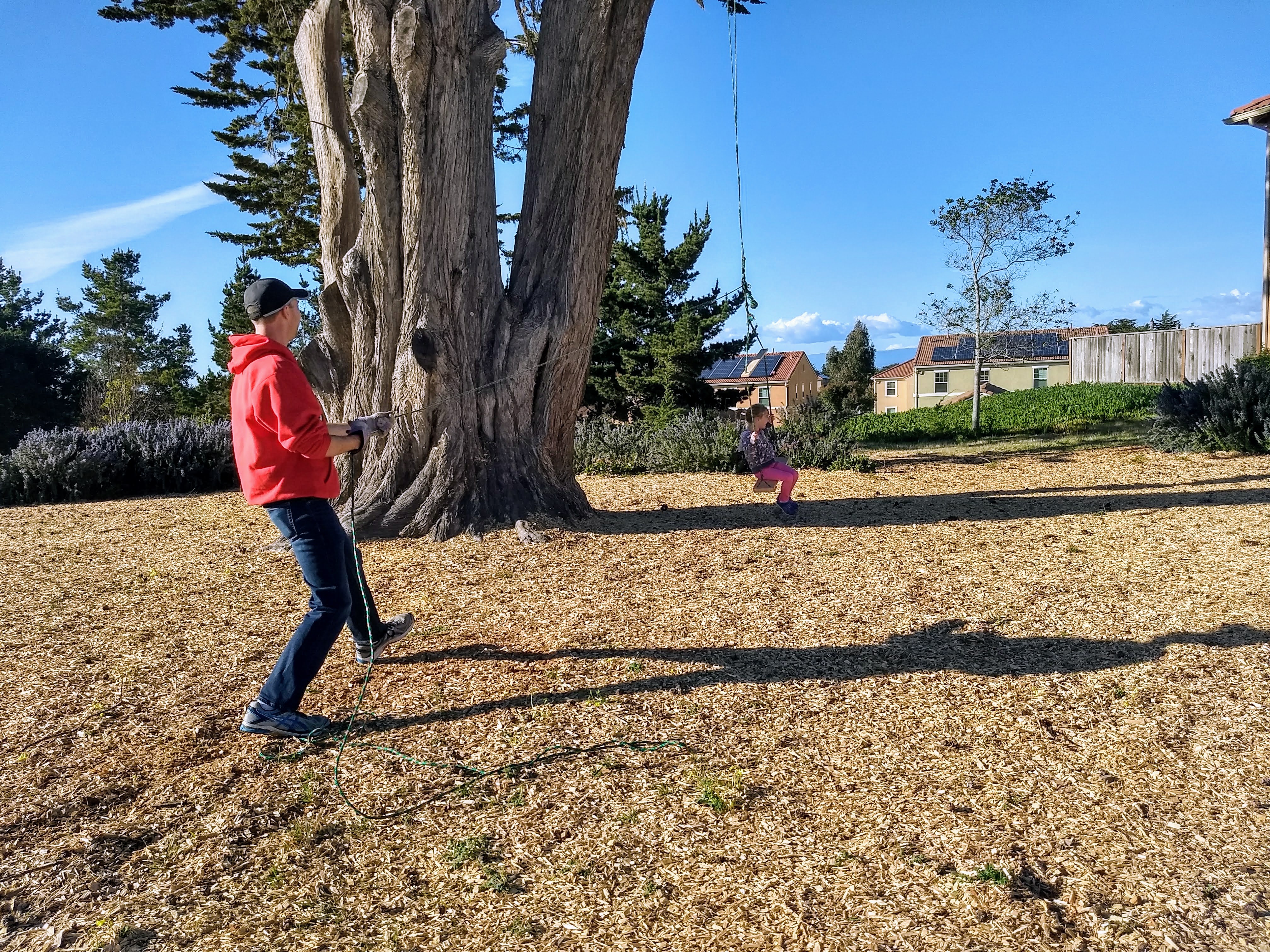 Sure I was cautious with the kids on the swing … at first. But after a while, they soared! While I was busy making sure the pull rope I kept hold of didn’t wrap around anyone’s neck, they laughed and encouraged my heightened level of stupid. 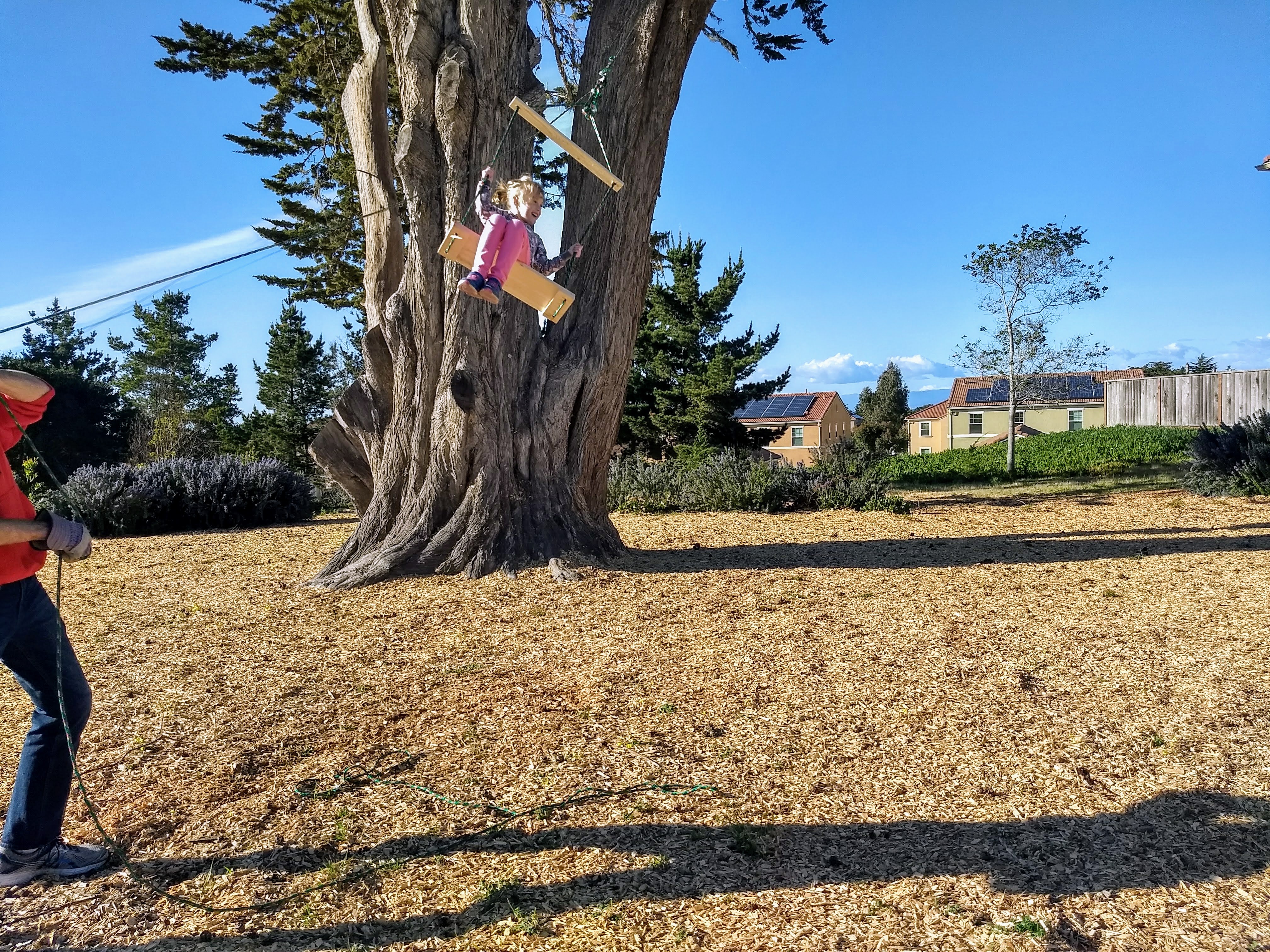 Now, before you, dear reader, call Child Protective Services with a query on statute of limitations for child endangerment, I do want to assure you that some precautions were taken. I, for one, wore gloves, because of all the mulch that got lodged in the pull-rope as it swept quickly across the ground, so that I could give it a quick tug if the blur that was my kid seemed to be on or near collision course with the tree trunk.

We also limited the swing to only one kid at a time. Well … at first.

This is where my guardian angel, weary from my youth, is still writing thank you cards to the kids’ angels. 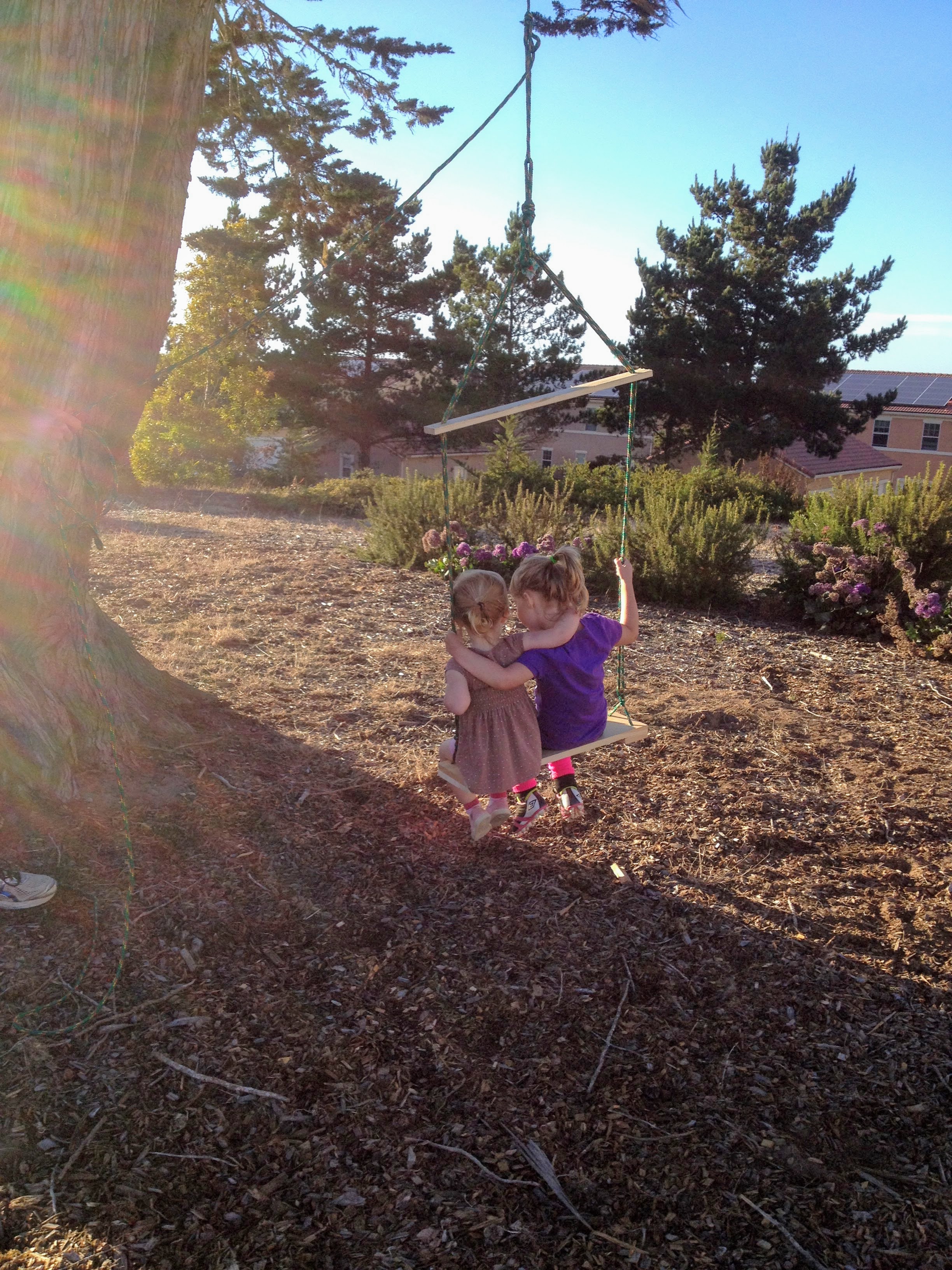 The neighbor kids were very excited about the tree swing. Their Mom (in hindsight) was likely not. I gave them rides with admittedly more caution that my own kids’ rides. One day, the last day, Lollipop #1 and the neighbor girl who was a year older than Lollipop #1, sat on the swing together and swayed back and forth.

They hit the ground hard. And Lollipop #1’s feet and ankles were directly under the wooden swing.

Have you ever experienced the moment of transition to where hindsight begins? Wondering if my daughter’s ankles were broken was that moment for me. It was quickly followed by thinking about what would’ve happened if the rope had snapped while the kids were only recognizable by their blur. A mix of emotions surfaced, concern for my kid, but also really a rather intense embarrassment at the perception (reality?) of my failure as a Dad to my kids and a responsible adult to the neighbor kids.

Fortunately, no ankles were broken. No lasting physical damage to anyone or anything other than the swing, which, over four years later, we still have, but remains with a snapped rope.

Natural consequences take on a whole new feeling when those that feel those consequences are the ones you love and who you are ultimately responsible for protecting and teaching.

In hindsight of hindsight, that is a thing, right? I think I will look back on the tree swing fondly. It was almost really bad. But it wasn’t. And we had a lot of fun with it. If a future house is near a tree with similar tree swing potential, will I make another swing, with a better selection of rope? Well … yeah …